The best ultramobile computing project so far: 1 year on a train.

After having problems with an apartment rental Media Studies student Leonie Müller, 23, decided it was a good idea to pack everything into storage, buy an unlimited train ticket and spend the next year working on trains. Three months into the project she’s become the focus of attention when it comes to digital nomads. Naturally we’re not interested in how she sleeps, washes her hair or makes her own food, we’re more interested in what tech she’s using and how she’s using it, right? What ultramobile tech do you use when you’re living on a train? 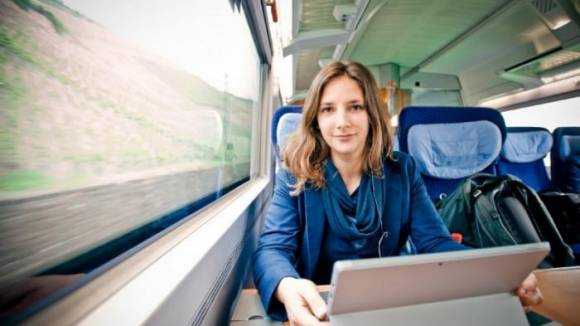 Leonie and her Surface Pro 3 (Source)

As a German resident I’ve got plenty of experience of working on German trains. The highlight has to be my Nachtzug experience but in general I’m confined to a seat-back table or a lap.  Occasional days in a train are fun but how do you do it every day for a year? A Surface Pro is at the center of it all.

I use the Surface Pro 3 too and despite the large surface area it requires for standing it’s a powerful, lightweight PC packed into a well-built chassis. It’s got excellent WiFi reception capabilities too which is rather critical when you’re relying on free hotspots, in-train WiFi.

The German ‘DB100’ ticket costs over 4000 Euro for the year and includes trains that have WiFi…but it doesn’t include WiFi. A days pass costs €4.95 and if you’re traveling through hills or under tunnels you won’t get much reception. To cut the cost Leonie took a T-Mobile phone contract which allows her to add a months in-train WiFi for the same €4.95. I assume she’s using the same data tariff for the hotspot on her smartphone. My tip would be to get a separate 4G hotspot though because you can put it in the luggage rack or outside a window (not on a train, obviously) and often get better reception. 4G is a must when you’re traveling through Germany too as many of the ‘blackspots’ were filled with 4G-only coverage. Leonie explains in a blog post that it’s not always easy with the on-board WiFi though. “Obviously ‘flowing WiFi’ is pretty cool… the ICE (train) is a 300 km/h cross-country transport and it’s not possible to get total coverage. I try and view the WiFi as an extra and I’m happy when it works.” Clearly offline working is important! Station stops become synchronization stops.

But what about the noise? Leonie invested in a pair of noise cancelling headphones for the noisy times.

Leonie is documenting the year-long project on her blog Wherever You Go, There You Are! and is using it as a part of the of her studies for her Bachelors degree. Look forward to reading more in 2016! In the meantime, if you’ve got ultramobile computing tips for Leonie, drop them below.

Related: Choosing a travel PC. My tips and choices, which incidentally don’t include a Surface Pro 3. Read the article to find out why.

I’ll be traveling to Berlin next week for IFA so I’ll give you a rundown on the kit in an article soon. Hint: The Surface Pro 3 is at the center of my tech kit too.