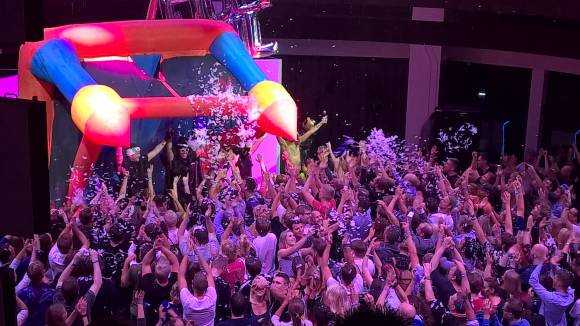 I sat down with Nicole Scott in the Techlounge for a chat about the new platforms (Skylake, 6th Gen Core and Core m V2 is really, truly official now!) and some of the new devices but there’s one thing missing from the equation. Windows 10 smartphones might not sound like the perfect leading-edge mobility platform but when you think of the Universal Windows Platform, the cross-architecture, cross-screen application ecosystem you have to consider the developer opportunity and that’s what I’m excited about. That’s what was missing.

We’ve seen a few Continuum demos but there’s more to it than that. Everything I’ve heard in the last 7 days about Windows 10 Mobile points towards impressive large-screen Universal Applications opportunities and standardized inter-connectivity.  USB 3.1 Miracast and USB-C are going to enable docking stations, barebones laptops and remote projection.  Here’s the Techlounge interview, with an unfortunate preview image! Captions anyone?

This part of the puzzle was missing at IFA and it was frustrating for me because I desperately want to test independently-created Windows Store apps that work across different screen sizes and I want to see how it affects the low-end Windows tablet, 2-in-1 and netbook market. Will our $200-$300 laptops turn into $100 ‘Continuum laptops‘ weighing 1lb? The laptop design opportunities here are unique.

What happens at IFA, stay relevant for the following year.

It won’t happen overnight though so what we’ve seen at IFA is still going to be relevant until IFA 2016, at least. A lack of 8-inch Windows tablets is telling but there were 10, 11 and 12-inch PCs to get excited about.

Core M got a really important and wide-reaching update at IFA and if there’s one tip I could give you about buying your next ultramobile convertible PC it would be to wait for the first Core m3, m5 and m7 test results and feature reviews. The spotlight is on the Lenovo Miix 70o now. At a target price of 699 Euros it could hit the spot better than the Surface products do. It comes with a keyboard, it’s light, it’s productive.  Initial hands-on here. Keyboard-focused hands-on here.

The other highlight was the Toshiba Radius 12. I’m not a fan of ultra-high DPI screens on Windows but this was something special. Professional photographers should take note of the Technicolor tuning feature and the incredibly lightweight design. Yes, there’s a full-size SD card slot! This isn’t a Core M-based 2-in-1, it’s a powerful Core i7 ultrabook-style laptop with slick, flexible styling and amazing specifications for the size. Well done Toshiba.

I took a look at PC sticks, cheap convertibles, mid-range 2-in-1’s and even a 110-inch TV at IFA and you can ( and should!) watch my IFA videos below in a 45 minute-long playlist.

Your comments and feedback on Continuum-enabled smartphones are also welcome below.