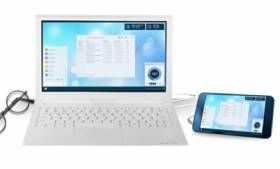 Before talking about the demos I think it’s worth spending a moment to mention the difference between Universal Windows Platform (UWP) and Continuum. In short, UWP includes the framework for allowing applications to display different layouts on one of three screen ‘sizes.’  UWP not only handles scaling but can also add or remove and re-position elements based on-screen and window sizes. The three device size classes are shown below and use the concept of ‘effective pixels’ which takes into account the distance that a user might have the devices from the eyes.

When a UWP app starts-up it gets the size class and then displays the correct UI.  UWP also handles input mechanisms such as pen, keyboard and mouse and allows features like ‘inking’ to be done through touch as well as pen. If you want to know more detail you can check out a great UWP primer from Microsoft here.

As screen size or window size changes an application is sent a ‘triggers’ that can be caught by the application to enable new layouts, scaling or to use higher-quality assets.

Continuum is the process by which a new set of triggers can be sent to applications based on connected screens and input devices. Screens can be physically or wirelessly connected and in single or multi-screen configuration. Keyboards can be added and removed on the same device (to trigger tablet or desktop mode on Windows 10 for example.)

It already works on Windows 10 tablets, see the video below.

The ultimate example of a Continuum experience is connecting a smartphone to an external screen, keyboard and mouse via a docking station or barebones laptop. When Microsoft launch Windows 10 Mobile and new Lumia devices it will be an important showcase for existing and potential customers, developers and 3rd party accessory manufacturers. I feel sure we’ll have a new class of products on our database before the end of this year: Barebones laptops. Clambook have been on the case for a few years with this technology so we should watch them carefully. There may even be a market for re-purposing old netbooks as phone-books, barebooks or whatever you want to call them,  would be very interesting for emerging markets. Miracast dongles become more important too. 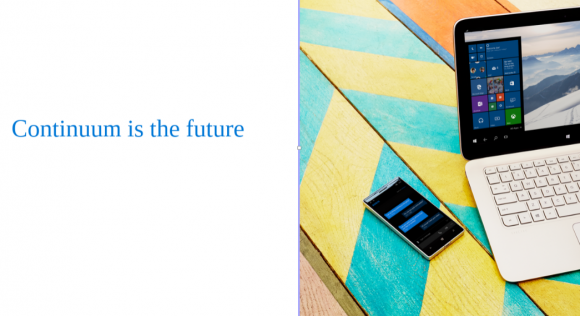 A Microsoft presentation slide from BUILD 2015

In the BUILD 2015 presentation video embedded below you’ll see a set of demonstrations that include UWP apps extending and expanding on to the screen, using different input options and the new Continuum controller app that will act like a trackpad when apps are running on a separate screen. You can download the video and slides separately here.

[14th Sept 2015] Although there’s no physical video output capability on current Lumia phones you still have the Miracast option. Unfortunately it seems that Continuum requires dual-screen support too which is something that current Lumia phones don’t have. Maybe it’s the Continuum controller app that’s the issue here. It needs to be present for all large-screen applications for when there’s no keyboard or mouse that can control the app. At the moment it means that Continuum can’t be used on current hardware. It’s extremely frustrating but there doesn’t seem to be any way round. To get the Continuum feature you’re going to need to buy a new phone. Check out the video below to see exactly how a Miracast-connected screen works on current Lumia phones. (This demo: Lumia 830)

In related news, the docking station for new Continuum / USB-C-enabled phones could be called Munchkin.