Last week I had the chance to check out the Milestone, the GSM version of the Motorola Droid. With its powerful processor and what I call a ‘dynamic’ operating system (which basically means you can load up apps and mess around with fun widgets) it is definitely a leading light in the web-centric smartphone for me. I own an Omnia Pro and I’ve got the N900 here as a test device so although I only had a short time with the Milestone I managed to take a quick set of photos which I’ve put into the gallery. 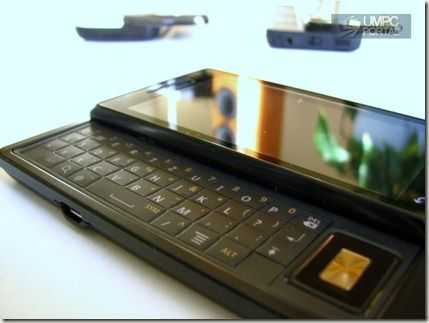 The Milestone is noticeably thinner in the pocket but you don’t quite get the keyboard experience that you do on the Omnia Pro and N900. While the N900 keyboard is small, it’s very well designed and offers good key separation feeling and feedback.

The advantages of the capacitive screen can’t be ignored though. I loved the light-touch and haptic feedback and the rugged glass front is going to be a huge advantage over time. I’m really not interested in having my smartphone screen look like something on a Nintendo DS!

I also took the Archos 5 Internet tablet and compared a couple of websites. Its easy to see how you lose effective space on a small screen. Fonts have to be big enough to read so looks what happens when you do thatâ€¦

Motorola Milestone and Archos 5 Internet tablet. Both running Android. Both 800×480.

Smartphones are getting really good at providing a solid web experience but with physical issues like this, it leaves the door open for dedicated devices that can provide a much more comfortable experience.

Next week i should be getting an HTC HD2 to test for a week. I’ve had a quick session with one and the screen is incredible but it’s extremely expensive and leans towards the business user. I can’t see too many ‘normal’ people buying one to be honest but we’ll see. I’ll be doing some videos and am planning a live vodcast with JKKMobile. We’ll let you know as soon as we have a date and time for it.