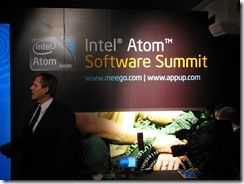 The Atom Software summit is just kicking of here at Computex. We’re expecting to hear about roadmap, support for advanced features such as multitouch, sensors, gestures. Different UI models from handset to netbook will be shown too. There’s also some hardware here that we’ll get to play with.

Stay tuned for updates throughout the day because later we join the ultra mobility group for their presentation.

Update: Full overview of the session is now available.

Hello from the Intel Atom Software Summit at Computex Taipei. Intel have just released an news about their smartphone and tablet platform previously known as Moorestown. The platform is a follow-on from the MID-focused platform, Menlow and includes power saving and power-boosting features that could see service in some very high-end smart devices. The processing unit is known as the Z6XX (assume there will be variants) and the control unit is known as MP20.

I’ve done some analysis of the news over at UMPCPortal but here’s a summary.

So you’ve got some new power-saving technology there that should allow devices to be built around a standard 1500mah battery but that’s not all.

These power management capabilities, when combined with Intel® Burst Performance Technology for high-performance on demand, and Intel’s Bus Turbo Mode for high-bandwidth on demand, help to deliver industry leading performance and power efficiency across a range of handheld devices.

These ‘turbo’ features will take the platform to 1.5Ghz and there’ll even be a version that will boost to 1.9Ghz. That’s more than a netbook! So if you add the low-power idle features with the turbo modes you’ve got a platform that spans a wide range of uses. With MeeGo being developed alongside Moorestown and a wave of interest in ‘smart’ devices, Intel have timed it well.

The press release even mentions Android. We saw it back in Feb but it looks like it’s become a core part of the Moorestown strategy now.

Here’s the video of Android running on a Moorestown smartphone from MWC in Feb.

We’re with Intel at Computex next month (I’ve been invited to Computex through the Intel Insider program) where I’m sure we’ll hear about launch dates, devices and a whole lot more. Expect videos and hands-on!

I don’t know where to start with this one but highlighting the incompatibility between Moblin and ARM-based devices is a good place too start and it gives us a hint that this might not be the huge and interesting MID and ‘smart’ book leak that it could have been.

The ‘roadmap’ picked up by Android Central shows three Dell MID devices. The 4.1 inch 640×480 (also marked up as WVGA) Thunder based on Windows Mobile/Android is the first. Then we have the 5 inch Streak which is being shown as having a Vodafone (Europe) variant. This is where the Moblin logo appears. The Looking Glass is shown with a 4:3 format screen (800×600) and finally there are a couple of ARM-based netbooks called ‘Sparta’ and Athens. Once again the Moblin logo appears.

Clearly this is an old internal roadmap showing a possible Moblin / Moorestown option for the devices and probably explains the ‘MID’ label. Clearly Intel weren’t ready for Dell so in this case, they lost out to Android and ARM. 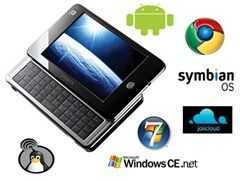 The definition of a MID, a mobile internet device, changes with every person you ask but one thing remains constant. It’s aimed at the consumer and not the productive professional. That’s ultra mobile PC territory! Consumer devices require careful attention to ease-of-use and fun, dynamic software so the choice of operating system becomes just as important as the hardware it’s built on. Shanzai have a nice article up today that covers most of the options. I’d add Maemo to the list and remove any reference to Windows desktop operating systems but it makes interesting reading. At the moment it looks like the ARM/Android combination might take the lead in the 2010 market but as Moorestown and Moblin for handhelds feeds in, the choice might get tougher. One thing is certain in our mind though, if you can’t tailor and personalise your device with applications and widgets, it’s going to be a boring experience. 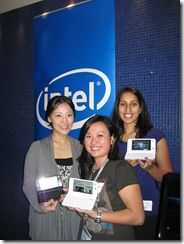 I’m just a few posts away from completing my Intel Developer Forum 2009 related work now and it’s time to round-up and summarize the news and to try and work out what it means for 2010 and 2011. Power-gating, Mobiln 2.1 and the App Store are just three very important elements but for the full overview, check out an article I’ve just posted at UMPCPortal which goes over everything I learned. I can not deny that it was disappointing not to see more Moorestown prototypes but the news is more than enough to keep my excitement going until the next big event. See you at CES 2010 in January.

Many thanks to Intel and the Intel Insider program for the sponsorship of my MIDMoves work at IDF.