Is this the Acer Aspire One MiniNote?

Latest information and new links are being added to the Aspire ONE product page.

Hot on the heals of the Dell Mininote leak are these images which just dropped into our forum. This posts are titled ‘Aspire One.’ 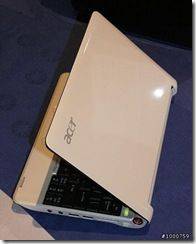 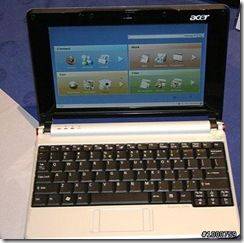 It’s got the same touchpad as seen on the HP 2133 and what appears to be an 8.9″ screen. Images show a, probably linux-based, user interface. Anyone recognize that UI?

Thanks ‘Liza’ whoever you are. We’ll be looking out for this at Computex and as soon as we have enough info, we’ll add it to the database.

According to his information in that pag, Acer’s Mini-Note is called “Aspire One”, running Windows XP SP3 on the 8.9 screen with resolution of 1024 X 768. The ODM partner is Quanta, the main notebook ODM partner of HP, DELL and Apple. The source thinks “Aspire One” is better looking than Asus’ EEE PC, however, no photo release yet.

Looks like it’s an Atom/Diamondville-based device. Digitimes mentions a 299 Euro price which is 100 Euro cheaper than the Eee PC 900!

Update#2: Now tracking the details in the database.