Most, if not all of you reading this will have heard of the Firefox browser and many of you will have tried Firefox 3.0 beta. I held back from using it for a long time because it was beta software but the latest release candidate seems stable and has me converted on all platforms now. Firefox 3.0 is fast. Firefox 3.0 is memory efficient. Firefox 3.0 has great features and overall its a clear winner on ultra mobile PC and netbook platforms, especially when using online applications.

Like Safari, it appears from my test results that Firefox 3.0 can process java-heavy pages on a Ghz-class ultra mobile PC faster than the data arrives over my 6mbps Internet connection which means that for rich Internet applications, the bottleneck is at the remote server and there’s very little else you can do to speed up the experience. Apparently, java processing in FF3 is many many times faster than in version 2 so this explains the big improvement with online applications. Not only is the speed improved but there are some great features that will appeal to ultra mobile PC users too. But first, here’s some test results. I took 5 devices and ran speed tests on 3 browsers [*1] using reader.google.com as the target page. It’s a java-heavy page and there’s no flash or major numbers of images to process but its typically my slowest-loading browser application. It represents a typical online application and for web-workers, its a good, tough benchmark.

More info after the jump… 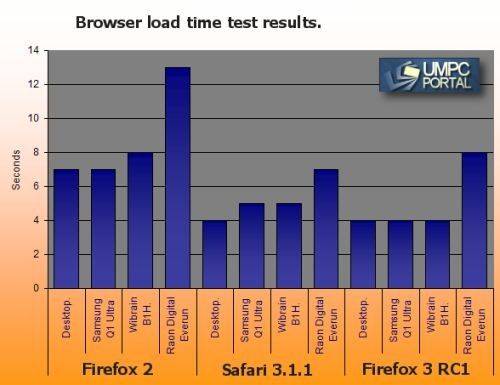 Graph shows page loading times for 4 PCs [details below] using three different browsers on a java-heavy page. IE7 and Opera 9 were not part of the test. See footnote.

As you can see from the results, FF3 wins and Safari is a close second. With both browsers, the low-power Samsung Q1 Ultra and WiBrain B1H can retrieve and present pages as fast as my desktop PC can which indicates that the bottleneck is not in the PC. It’s either my Internet service or, much more likely, a server latency and speed limitation. Secondly, the Everun results improved dramatically. The Everun uses a very very low processing power CPU but its good enough for browsing, far faster than any smartphone solution and a good indicator of how MIDs built on the Silverthorne 800Mhz processor will perform. It is estimated, and even proven in early tests, that the Atom Silverthorne 800Mhz CPU will be significantly more powerful than the AMD Geode LX900 which will bring the results closer to what we’re seeing on the Q1 ultra here. Closer to desktop speeds.

It might seem like I’m talking about seemingly insignificant numbers of seconds but here if you use a browser as much as I do, its very significant. Knowing that I will be able to reach near-desktop browsing speeds on an ultra low power Atom processor means I can choose from some of the most power efficient devices available and get more battery life which is equally important to me as having a fast browsing experience. It also proves that netbooks and MIDs are going to perform well when fulfilling their intended role.

Missing from the results above are the page load times from the fifth device, the Nokia N810. What can I say. It’s slow, has always been slow and if Nokia continue to try and run it on a mid-range smartphone platform, will always be slow. Expect 1 minute plus if you want to load Google Reader which in my opinion is unacceptable. ‘Next!’

Both Firefox 3 and Safari are fast but here’s a list of features that push Firefox out in front .

One point I should raise for anyone that relies on the TIP panel in Vista or XP Tablet is that Firefox doesn’t really plays well with it. Personally I don’t use this method for input but I know that others do so it’s worth mentioning it. Check out this post at jkOnTheRun for more info.

If you own any device based on a low-power computing platform (VIA C7-M, Celeron 900, Pentium-M, A110, A100, Atom or Geode LX) and the browser performance is important to you, you should test Firefox 3.0 as soon as you can. It combines some great speed improvements with good memory management and an excellent feature set. If you already use Firefox 2, upgrading to version 3 should be the next thing you do on your ultra mobile PC or netbook.

Devices used in this test:

Footnote *1. You might be wondering why I didn’t use IE7 or Opera for my tests. I gave up on IE7 as my ultra mobile PC browser a long time ago because of high memory usage and slow loading times. It has some nice features but I don’t recommend it for UMPCs unless you need it for compatibility reasons. As for Opera, I’m having a big problem with it on java-heavy pages like reader, gmail, and docs. CPU usage is high and page loads take a long long time on all test hardware. If anyone knows why Opera is so exceptionally slow, let me know.