The Archos 5 Internet Media Tablet is a 4.8 inch 800×480 tablet device running Android and Archos Media Player software. Prices start at 230 Euro (8GB) but I’ve got the 32GB version here (bought myself) and I’ve had been pounding it hard since I got it last Friday. So far I’m loving its capability and excited by its potential but am frustrated by the amount of crashes and lock-ups I’m experiencing. At this stage I’d advise customers to hold-off on a purchase and take the time to do some more research and to monitor my ongoing experiences with the device before diving in. 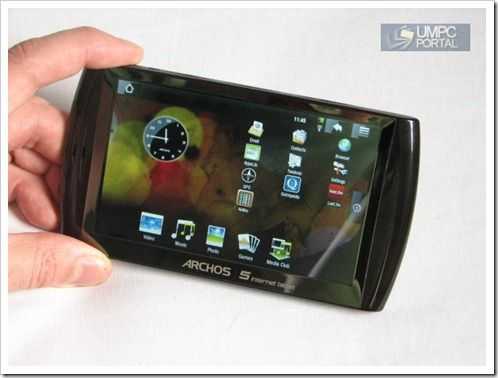 If you didn’t catch the unboxing video or the live session on Friday , I recommend taking a look because so far the device has been really interesting. One word of warning though, it’s very unstable and buggy right now. I’m experiencing at least one software problem per hour of use. Version 1.022 of the firmware desperately needs an upgrade and I’d go so far as to say, DONT BUY THIS DEVICE YET if you’re thinking of using it for business or if you’re the sort of person that gets frustrated at unfinished products. Archos have clearly skimped on testing. Even as I type this paragraph, a notification has come in but I can’t unlock the device to get to it. I’m going to have to reboot. Not good enough Archos.

Putting these stability issues to one side though, I think we’re looking at one of the most interesting Personal Internet and Media Player (PIMP?) that has ever hit the market. In fact it’s more than just a consumer focused PIMP, it has potential to be a good navigation device and ebook reader too. Yes, the latest iPod Touch is good, more pocketable, more stable and has better software but the Archos had a much better sizing for these target scenarios. The screen size is key. The Archos Tablet has GPS, FM transmitter/receiver and a Micro-SD slot built-in too.

3 days after unboxing the device I still cant get over how slim and light it is. It’s just 15gm heavier than my Omnia Pro smartphone and 7% bigger in volume and yet the Internet experience is in another league altogether. This is helped mainly by the Ti OMAP 3 platform with its ARM Cortex core but also by the efficient Android OS which starts up the browser very quickly, extracts YouTube HQ and HD (yes HD) videos (despite having no flash support) and has some nice built-in features. The screen size allows the user to read and select links (that I’m sure have an expanded ‘hit’ area) with ease too. You can use it as a mobile browser (where many websites return an Android-specific page) or as a desktop browser for the full-fat versions of pages. Javascript is handled well.

For more information, specifications, videos, images and links to important information about the Archos 5 Internet Tablet, see our information page.

As a media player it doesn’t seem to have moved on much since the 605 Wifi (that I have) although to be fair, the features were already good on the 605 and reaction-time, especially with uPnP browsing, is now vastly improved. Also included through the Archos media application is access to the Archos library of streaming TV and radio stations. It was nice to find Groove Salad without having to track down and enter the URL. Out of the box the device can handle most formats apart from MPEG-2, WMV HD profile and anything with an AC3 (multi-channel) soundtrack. The plug-in for these costs 15 Euro and is recommended. I’m seeing H.264 720p support up to about 2Mbps (I have seen more but you need a cleanly booted system for this) and WMV HD up to 6Mbps. Divx support goes up and over 6Mbps. There’s no support for 1920×1280 resolution videos. Also note that there is no TV out available until you buy a basic composite/s-video dock (30 Euro) or the HDMI mini dock. These are also needed to expose the USB-host feature. Without that you can’t access any USB devices. (although the device itself acts as a USB harddrive when attached to a PC.) If you’re buying the device for quality video playback on a digital screen, add about 50 Euro to the cost of the device for the plug-in and dock. If you’re looking for full PVR capability, note that the full dock costs 150 Euros.

The Archos Android tablet isn’t a true Android device. There are two major differences. Firstly, there’s no Google integration. That means no Google maps, no contacts sync or other Google features. This was a disappointing discovery for me as I’m tightly integrated with Google services. Contacts sync would have been a real advantage. The second difference is that you don’t get access to the Android applications store. Archos have their own developer ecosystem and their own app-store which is sparse in comparison. You won’t yet find any of the coolest apps in the store. No Spotify or Last.fm apps! Even the apps in the Archos store are rather hit and miss with many of them not installing and some not even available. Many ‘apk’ files (the stand-alone files used to install applications) are available outside the store but often hard to find. I’ve managed to install the last.fm client, Shazam, Spotify, Andftp and Doggcatcher (why no podcatcher built-in?) and they all appear to work. (Some can’t be used in Germany) Aldiko, the ebook reader (pic below) Twidroid, think Free Mobile, Ebuddy, Moov and a very good email app are either pre-installed or available from the on-device app-store. (For the latest app-store news, see http://appslib.com/developers/index.html New apps are appearing all the time.)