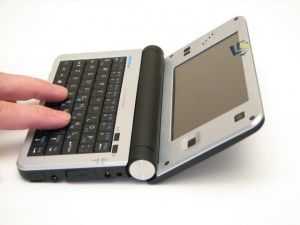 Long story short, the UMID BZ [details and specifications] is a superb bit of kit and one of the best UMPCs that I have ever tested. Here’s the long story…

For those of you that aren’t familiar with UMID , the BZ is the updated version of the UMID MBook M1 which was, by most reports, the smallest laptop in the world. It’s actually more of a palmtop PC than laptop and at 363gm, the newer BZ is only a tiny bit heavier. This is a true pocketable PC. For the specifications and the links to previous news articles from around the ‘net, check out the UMID Bz information page where you’ll see that the UMID runs on an Intel Atom 1.2Ghz CPU and has a great set of specifications including touchscreen, full USB port, VGA out, MicroSD, WiFi, Bluetooth and more.

The UMID BZ first surfaced back in Sept 2009 where I had a great chance for hands on and a video or two but it wasn’t until CES that the final production samples were being shown around. I picked a sample up from UMID on the 5th of Jan and enjoyed it until the battery ran out. Two weeks later I finally got hold of a charger and full coverage commenced…

During the last 6 weeks the UMID has become a must-grab device for me and has displaced the Fujitsu U820 and Archos 5 for the most part. Those two devices still fit into a few scenarios but the way I’m using the UMID makes it clear to me that it’s a better fit overall. The BZ offers a really good balance between reliability, productivity, processing power, pocketablility and battery life.

I’ve highlighted most of the important issues, both positive and negative, in the video below but I just want to re-iterate the battery life issue. Not only does the UMID last between 4 and 5 hours when in use, it has great standby battery life,  negligible off and hibernation leakage, a standby and hibernation mode that you can trust but it’s able to serve very well as an always-connected device. The trick here is that UMID doesn’t just turn off the backlight when the device is closed, it actually disconnects the screen completely and in my tests I was seeing a drain of around 2.5W which means is will stay connected to WiFi running a few background apps (a twitter client and GTalk in this case) for well over 6 hours, maybe even 7. The UMID engineers deserve a pat on the back!

Update: In a test, I ran the UMID for 2 hours doing light Wifi Web work with a few apps in the background. It used 36% of the battery in 2 hours. I then turned off Wifi, closed the device and left it on until it ran out of battery. It took another 6 hours!

There are no showstoppers on the UMID at all but if you want to get picky, yes, there are things that could be improved. The plastics around the screen are cheap for example. The mouse buttons are not that easy to press and the optical mouse on this (production sample) seems to be more sensitive than it should be and there’s that occasional blocking as the SSD struggles to keep up in heavy multitasking scenarios. I’d also love to see 3G included but the UMID is working out well as a general substitute unless I need to go the whole day with 3G.

Threat from the Viliv N5?

This is the big question for anyone considering the UMID BZ. Will the Viliv N5 be a better UMPC? It certainly looks good, feels good, has a better keyboard and has that confidence-inspiring Viliv brand but it looks like there’s still a few months to go for the Viliv N5 yet and of course, we don’t know how much the N5 will cost. All I can say is that whatever Viliv do with the N5, there really can’t be much that separates it from the UMID BZ. The UMID BZ will remain a great choice whatever happens.

Feel free to ask questions in the comments below. I promise to answer any questions posted in the next 7 days. You might want to check out the UMID forum too where there are a few UMID owners hanging around that can also answer questions.

UMID BZ supplied on long-term loan by UMID. Many thanks for their support.