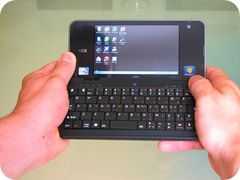 For those looking for the perfect handheld PC for road-warrior and productivity work, the Viliv N5 has to be near the top of the list. Sliders and tablets are great but nothing beats the clamshell format for practicality in terms of usage and ruggedness. Very similar to the UMID BZ, the Viliv N5 offers a desktop operating system on a very efficient Intel Menlow platform with long battery life, an excellent video playback experience (up to 1080p tested successfully without any modifications) fast SSD and, in the version we’re testing here, the convenience of built-in 3G. The optical mouse really helps navigating round Windows where sometimes, a small touchscreen isn’t the best solution and, like the Fujitsu UH900, the N5 goes for a keyboard size that works for both touch-tapping and thumb usage although as always with keyboards that try and do both, it’s not optimal for either scenario.

In testing over the last 4 days I’ve been impressed with the multitasking performance of the device. Compared to the UMID BZ it offers a smoother experience with none of the SSD-overload that is all too easy to experience on the BZ. The finish of the device is fantastic and represents Vilivs usual attention to detail. 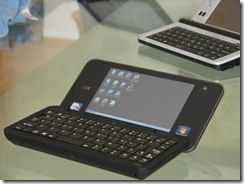 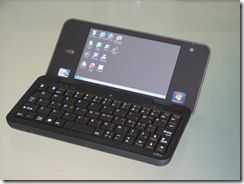 On the downside there’s no analogue video out (the VGA, composite, S-Video port is blanked-off) and the screen touch-layer is heavier than a lot of modern UMPCs. The brightness, too, is noticeably less than on other devices, especially the BZ. Windows 7 Home Starter limits how you can change your desktop (setting the display DPI to 125% really helps though and the video below was taken before I had made that adjustment.) The 32GB SSD is partitioned for a recovery installation and you end up with just 11GB of user disk space.

A note about battery life.

As I type this I’m seeing 25% battery left after 2.5hrs of use which equates to over 3hrs online usage. The screen brightness has been at 100% during this period and both Wi-Fi and 3G have been on concurrently for about 1 hour of this. Unfortunately, the battery life indicator on the Viliv N5 only shows remaining capacity in steps of 5% and it can be inconsistent and non-linear. With careful set-up, I expect users to be able to get 4hrs out of the device but not much more than that. The battery has only 15Wh capacity so with Windows 7 on the Menlow platform, don’t expect anything more than this.

All the important points are covered in the video below but as I write this, a second video is uploading which compares the Viliv N5 to the UMID BZ. There are advantages on both devices and as we learn about the UMID SE, maybe there’s a third option coming soon. Stay tuned for a second post focusing on the differences between the UMID BZ and Viliv N5.