Thanks to nick95 in our forums we now have an official spec sheet on the Ocosmos OCS1 that we covered at IDF in September. The OCS1 was one of the first Oaktrail products we’d seen and definitely, a UMPC! [Tracking page includes links and videos]

5 inch Slider screen at 1024×768 looks useful but those controllers don’t include a mouse pointer which, especially on a Win 7 device with capacitive screen, is not going to help. Interestingly, Ocosmos are pitching this at carriers although to be honest, every UMPCs manufacturer’s secret aim was always to get a carrier as a channel.

If I remember my Oaktrail specs correctly, we’re looking at a 1.5Ghz or 1.9Ghz single-core CPU (I suspect the former) here and some interesting improvements over the older (no, let’s just call it ‘old’ now!) Menlow platform. 400Mhz GPU with HD decoding, 720p encoding, MP3 decoding hardware, improvements in memory speed and a more compact silicon layout. Overall battery life improvements are expected to be in the 20% range (that info comes to me from an ODM contact using the platform) with idle (screen-off, Wi-Fi connected) potentially even better. 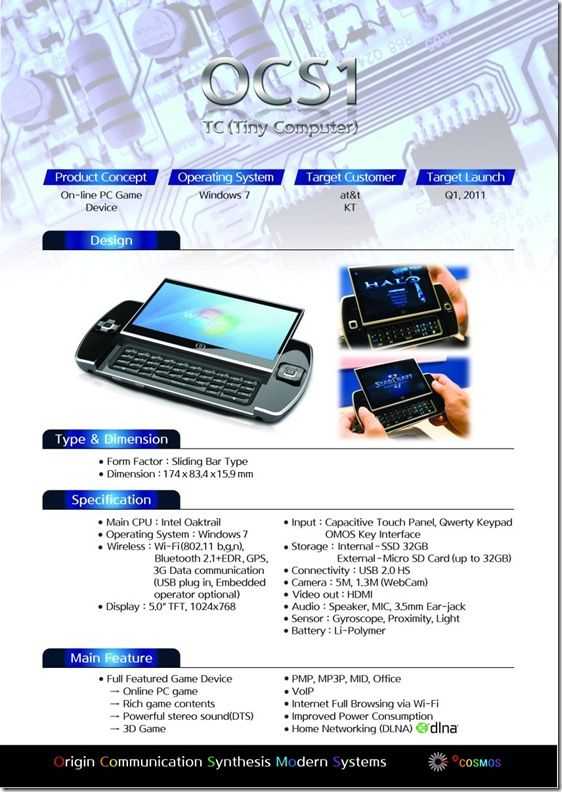 The OCS1 is being pitched as a gaming device but I have a few problems with that. 1) Windows games often required the CDROM to be present. You’ll need ‘no-cd’ hacks. 2) The GPU is improved over Menlow but years behind the performance of a modern PC. You’ll need to choose games 3-5 years old although with AppUp starting to deliver some interesting games and game developer partnerships, it’s one to watch for games that will definitely fit the screen and processing capabilities.

When we spoke to Ocosmos at IDF they were talking about 10 hours battery life but let me tell you that even if they slap a 24wh battery pack on the back, 10hrs is still only going to be the idle, screen-off figure. I’m expecting a 10-15wh battery and an average in-use drain of about 5W giving about 3hrs of working, screen-on life over about 5hrs of ‘on’ time. If they manage to squeeze in a 24wh battery it will raise the price and weight somewhat but return an interesting 5-7hrs.

‘Target Launch’ is Q1 2011 which sounds interesting enough for a CES showing. We suspect that if they’ve got something working well by CES, it will be on the Intel booth. Between now and then we’ll try and get an direct update from Ocosmos.

Ocosmos OC1 thread in the forums.