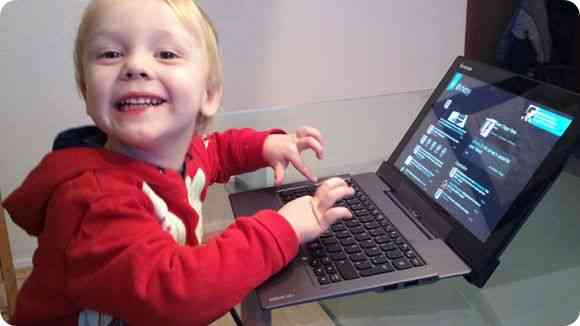 My son would like to introduce you to the Lenovo Ideatab Lynx keyboard Dock which completes the Ideatab Lynx order I placed last week. I’ve already put an early review out for the tablet but the review won’t be complete until I’ve spent some time with the keyboard.

This article has been updated after an extended testing session. See [update] sections below.

Build quality isn’t exactly top-of-the range and for a Lenovo device, somewhat dissapointing. It’s a plastic unit, fairly thin and has a bit of annoying  flex in the middle. Fortunately that doesn’t affect the keyboard experience which, I’m happy to say is a whole lot better than the experience on the Acer W510, a similar style dockable with a 10 inch screen size. It’s not up to what I’ve experienced on Ideapad Ultrabooks (and nothing like a Thinkpad!) but it’s not too bad. Keys are well spaced and have a solid feel although I’m having to press slightly more than I would normally on a laptop keyboard. If this doesn’t correct itself through my typing style of ‘bedding-in’ then I’m not going to be happy.

[update] After 6hrs work-testing today I’m not happy at all with the keyboard. The feel and layout of the keyboard is good but the amount of dropped key presses is terrible. I’ve tried different typing angles and strengths but it’s not working out at all. This is, to be honest, one of the worst Lenovo keyboards I’ve ever tested, and that includes Lenovo netbooks too. It looks and feels like the old Ideapad S205 but doesn’t act like it. I wonder if it’s actually a  USB issue though because I can’t identify any specific keys or  typing action that makes it worse or better. The dropped key presses, sometimes 2 or 3 in a row, seem to be random.  Connecting a full size USB keyboard results in perfect action though so maybe Lenovo have done something silly with the USB hardware. I will, of course, pursue this with Lenovo and my retailer. Maybe, just maybe, I have a bad (can you say early beta-test?) product. 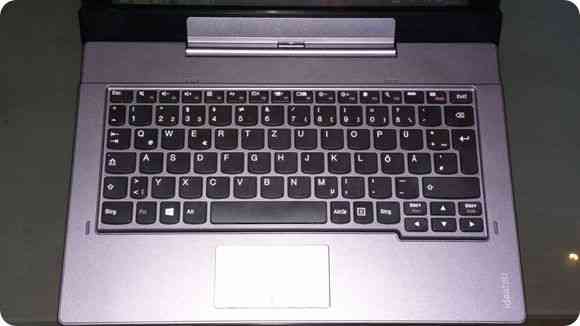 As for the mouseâ€¦lets talk about the two USB2.0 ports on the side of the device which at least allow a decent mouse to be plugged in. The built-in mousepad feels too plastic, too small, is single-touch and has a very difficult right click. I wouldn’t be surprised if this was made by the same people that made the one on the Acer W510 but at least it’s not jumping about all over the place. There’s no excuse here, even if the tablet has touch control. You can not get away with such trash on a keyboard dock that costs 150 Euro.  As this is a USB keyboard and mouse I don’t see how the experience could be improved through software.

The docking mechanism isn’t as easy or smooth as on the Acer W510 and there’s a perspex guide that also feels a bit cheap but the result is a good viewing angle, a raised keyboard and reasonable balance â€“ you can use the touchscreen without it falling backwards and it even works, if you’re careful, on a lap. Total weight of the tablet and keyboard is 1.3Kg which isn’t bad for an 11.6 inch ‘laptop’ with about 50Wh of battery. The charger and cable adds just 110gm to that.

[update] In a demo to some co-workers today, it wasn’t a smooth process to get the tablet out from the dock. 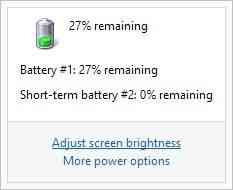 On the battery there’s one thing to note â€“ the keyboard battery charges the tablet battery when it’s docked which means you’re charging one battery from another. This is not an efficient way to use a battery and you can expect to lose something in the order of 30% of your charge through the recharging process but at least you can be sure that the primary part of the unit has the best possible battery life. The battery in the dock appears as a ‘short-term’ battery which is a strange label but I think the correct label for the type of device that â€“ an HID UPS battery (uninterrupted power supply.) Think of the keyboard battery as an external power pack with USB-based capacity reporting.

Given that the screen on the Lynx is 11.6 inch and the battery charging has an inefficient set-up I’m not expecting the Lenovo Ideatab Lynx to have the best battery life of the Clovertrail tablets on a per watt-hour capacity basis. We’ll see after some tests.

[update] After a 6hr test with battery life measurements today I can say that either the keyboard battery is smaller than the tablet battery OR that the charging arrangement is resulting in poor efficiency (as mentioned above.) In a working environment (WiFi-on Web working) I got 4hrs from the keyboard dock until it switched to internal battery on the Lynx tablet. After that my measurements indicated that the tablet battery would last about 50% longer than the dock battery. In total I was seeing 10hrs of web working capacity so a 40:60 dock:tablet split can be expected. Not surprising considering the charging arrangement. I prefer what Acer have done with their battery and dock setup on the competing Iconia W510. [Full Review here]

Does it charge from a standard Micro USB charger? I tested a power pack that is able to deliver 1000 mA an couldn’t see any proof that the unit was charging when it was on and docked. I was able to get the dock charging light to come on when the tablet was not in the unit. Rate of charge could be an issue but I’ll try and test that over the next week.

Overall I think there’s room for improvement in the Lenovo Ideatab Lynx keyboard dock. It’s working and providing a reasonable level of productivity, one that I think I could cope with for short trips away from the office with email and blog coverage but not for writing a 2000-3000 word article. The mouse is cheap and the plastic feels a bit cheap. Is it worth $/Euro 150? I can’t tell you just yet but if it gets allows me to be a bit more productive when mobile then I guess over a few years it will easily pay itself back.