END_OF_DOCUMENT_TOKEN_TO_BE_REPLACED

This is going to be music to some peoples ears because APT-X is now supported on Ultrabooks and notebooks with some Intel Centrino Bluetooth stacks. I heard the news in September but it’s only now I’m able to confirm it.

That message just popped up on the Samsung ATIV Book 9 Plus I’m testing as I paired some Sennheiser PX210 Bluetooth headphones.

END_OF_DOCUMENT_TOKEN_TO_BE_REPLACED If there’s one thing that gets me going it’s a mobile device with  great audio features. I love music discovery, mobility and quality. The fewer wires, the better.  The Creative ZiiO 7 and 10 inch devices have just such a feature and having tested it at CES I can say that I’m now a fan of APT-X and I want to integrate an Android tablet into my lounge Hi-Fi as soon as possible. I’m not sure the Creative ZiiO tablets are the hardware I’d use though. 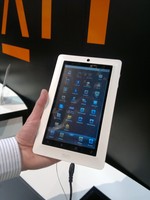 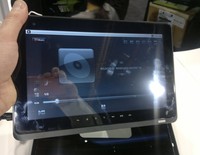 APT-X is a brand of licensed codec that can be used over the A2DP Bluetooth profile to provide CD-Quality output. The default A2DP profile (SBC) falls short of that, and it’s noticeable. Obviously APT-X is an optional, licensed codec and you won’t find it on many Bluetooth implementations but I’m hoping it feeds its way into more stacks as soon as possible.

The ZiiO Tablets themselves are somewhat sub-par. The screen is dull, includes resistive touch, there’s no Google Market and while the device might be cased in rugged plastic, it looks and feels low-quality. I wrote about them previously and even then, when information was thin on the ground, the standout feature was APT-X.  The  price of â‚¬249 for the 7 inch version is reasonable for a Cortex A8 device and Creative have added some nice A/V software but without the Google market and with the screen issues, you might be disappointed. The UK sales page is here. Admittedly, the 10 inch version (â‚¬350) does look better and when it gets an Android 2.2 upgrade, might be worth taking a second look, as long as you don’t mind a resistive touchscreen.

I tested the ZiiO 7 with the Creative WP-300 headphones that also support APT-X. The quality and comfort surprised me. The quality also carries on through the Creative Speakers and this is obviously the key feature. There’s a unique selling point here and it’s all to do with music around the home. I like that idea but I hope Creative bump up the quality of those tablets to match what I heard. Maybe products based on the SiVO Digital Home Platform (announced at CES) will be better.

Interestingly, I tested the WP-300 headphones with the Galaxy Tab while I was on the stand and I thought the quality was good despite not supporting APT-X.  (At least as far as I know.) I’ve never spent $90 on a pair of headphones before but they sounded so good that I’m very tempted. If the Galaxy Tab gets APT-X support in it’s next firmware, I’ll be pushing the button for sure. 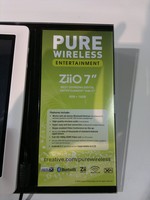 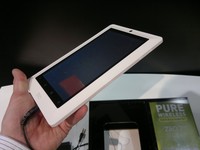 More in the gallery. 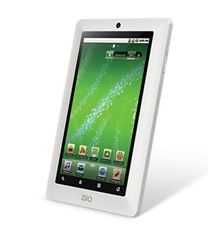 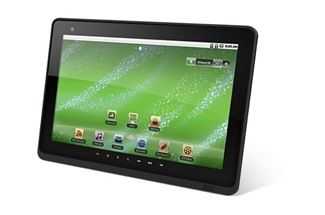 Lets put aside the issue of resistive touchscreens for the minute as I think most of you know that it’s not the best way to implement a finger-touch user interface. I’m taking a closer look at the Creative Tablets for one reason â€“ APT-X.

APT-X is a 352kbps ‘CD-quality’ codec implementation that can be used over the Bluetooth A2DP profile (instead of the default SBC codec) to provide high quality audio, something that A2DP hasn’t really delivered on yet. [More information here.] Up until now, if you wanted a high-quality digital stream to feed into your HiFi, you had to take either HDMI or a digital audio output from a docking station. If you wanted something without wires, there wasn’t much choice.

The ZiiO Tablets are built on the Creative ARM Cortex A8 core in their own ZMS-08 application processor and they seem to have focused well on audio reproduction. I’m not saying this will be ‘pure’ but it’s likely, with the APT-X implementation, to able to deliver high quality wireless digital audio. Of course, you’ll have to find a device that can receive the audio (Surprise! Creative have some headphones and speakers) so there’s still some way to go here.

As for the rest of the tablet, it looks like an AOS (Android Open Source) solution with a good chunk of storage and a decent price although Android 2.1 won’t get the best out of the ARM Cortex core for sure. If you can handle the resistive touchscreen and fancy playing with some HQ audio and video (H.264, MPEG4, WMV9, MJPEG, MOV, AVI, MKV is supported) it could be of interest for you. If not, you’re probably going to be taking a look at the Archos Tablets.

ZiiO 7 information at Creative website. 16GB version will be available for just under 220 UK Pounds