Ramos i10 Pro launches with Dual OS and 3G. i10 Note and i8 Pro in development.

At an event in China today Ramos introduced three Windows 8.1 tablets. Two of these we’ve seen before but one is new. There’s also some information about the dual OS ability of the i10 Pro.

We’re expecting variants of these device specifications to appear over time but for today Ramos have pitched three devices are three different segments. The 8-inch i8 Pro runs the Z7340D CPU and comes with the basic Windows 8.1 tablet specifications. There’s a GPS on board but we’re expecting this to be a low-cost Windows 8 tablet. No availability or price has been given but when we spoke to Ramos last week they were indicating that it would come ‘next’ after the i10 Pro. 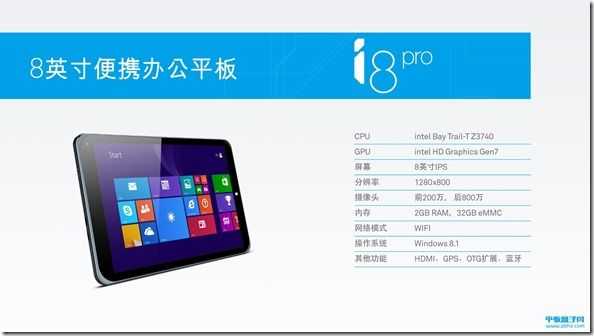 The Ramo i10 Pro is shown with 3G specifications and is the model with the Dual OS feature. Android 4.2.2 is on board with Windows 8.1. The FullHD screen sits above the same basic Windows tablet specifications of Z3740D, 2GB RAM and 32GB SSD. Some talk of 64-bit Windows in some sources leads us to believe that the CPU might get upgraded to the Baytrail-CR variants when they’re fully available. The i10 Pro will be available in 5 colours.

The 3G function is enabled with the Ultrastick 3G SD card from Huawei which we understand is bundled with the i10 Pro. Clearly that might not be the case in other regions.

Indications are that this is a dual-boot solution as we saw demonstrated at CeBIT although final confirmation has been given. A dual-boot solution might not cut across the Google Play non-fragmentation agreement but we wait to see just how much more than basic Android this build is. 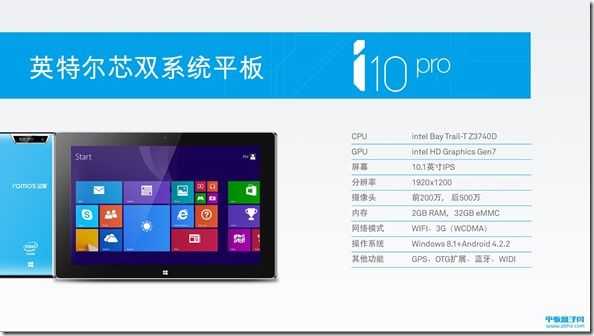 The new model we haven’t seen before is the i10 Note which offers Windows 8.1 on a 1280×800 screen but with a pen. It’s not clear if this is a capacitive-only pen. Indications are that the product is still in development. 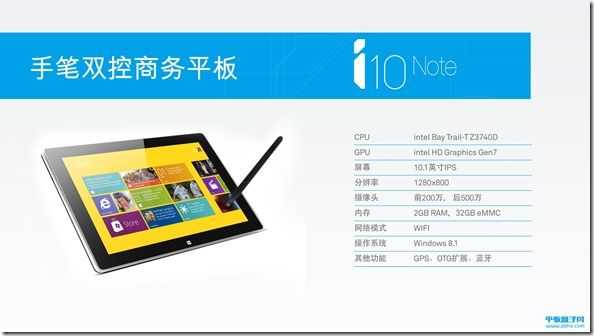 We’ll update you as soon as we have new information. We’ve already contacted Ramos for a review device.

A live blog in Chinese from the launch event is available here.

Dual-OS Update: Intel, Nokia, American Megatrends and Why Google Might Not be Needed. 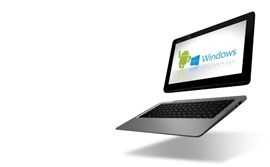 There’s another BIOS producer getting into the Operating System Vendor space. Why? Because there’s a potential market for Windows 8 devices to offer Android as a live-switch alternative and the BIOS producers are well positioned to enable this. What are the options and issues, drivers and players and is Google at risk of being left out of this potentially big shift to high-power Android in the consumer space.

At MWC last week I spoke to a number of people about Dual-OS systems and there appears to be quite a positive note on it due to slow progress being made by Windows stores. It seems developers are unimpressed by the numbers available for the Microsoft Stores but excited about the prospect of Windows 8 Store unification. They won’t put any major effort into Windows apps in the meantime though and that could leave an 18-month gap. What do Windows laptop and tablets manufacturers do in the meantime? The idea is to go beyond the Smartbook (cheap Android-only) laptop concept and offer dual-OS on high-power platforms which could work not only to solve the application problem but could offer some very high power FullHD Android gaming experiences. The latter idea is one worth thinking about as gaming developers huddle around Android on tablets and smartphones that are already getting FullHD displays.  Think about the developments in 2-in-1 hardware (fanless Core-based systems should be common later this year) and it fits nicely as a potential solution for the laptop manufacturers. If it gains traction in the next 18 months then how about another stab at the Android-powered laptop? Consumers could be better served with a laptop-focused Android build now that the architecture has a) advanced greatly since the last attempt at smartbooks. b) hardware for always-on high-power and high-quality 2-in-1 solutions is now available. c) Consumers love Android d) Gaming on Android is BIG.

There are many ways to achieve a Dual-OS solution. Here are 6 potential solutions.

At CES we heard Intel announce their Dual-OS platform. They’re working on it but there’s next to no information available. My research indicates that they’re looking at a platform that switches from one to the other in sub 4-seconds but one that also puts the alternative OS into sleep. There might be a few partner issues on the horizon though.

ASUS have their ‘proprietary’ system too. I can confirm this is not the same project as Intel’s and my sources tell me that Google weren’t happy about it, just as they weren’t happy with the Samsung ATIV Q which appears to have been denied access to Google Play and taken back to the developers for a re-think.

Is Google Play critical though?

Think about this; If Google won’t allow their services to be used on top of Android Open Source then how about Nokia services, Microsoft Services or Amazon services? Take a look at the Nokia X project to see how many Nokia and Microsoft services have been integrated into Android open-source. Think about the success of the Amazon Kindle, the apps that have been ported over and the Amazon services that have been integrated into that product. 3 years ago we didn’t have these alternative service layers but now we do and Google doesn’t have the monopoly any more. If (and that’s a big ‘if’) Dual-OS leads to Android consumer laptops and gaming rigs it’s this high-powered i86 architecture that has the lead and if Google doesn’t want to cross this bridge, Nokia (and by definition through the take-over and Nokia-X project) Microsoft and Amazon have a good opportunity.

Back to American Megatrends: There’s an interview video with President & CEO of AMI, Subramonian Shankar available below (via IT-Techblog.) In the video you’ll hear about the hypervisor architecture and a public download of the system. Through some digging I’ve found a site called AMIDUOS which looks like the place you’re going to find the software soon. It was tipped by an engineer working at American Megatrends so it looks likely! I also have a request in for early access.

The hypervisor solution is not without its issues. How do you turn off an alarm on the ‘other’ running OS? How do you control notifications, access to USB hardware, GPS and other hardware? Can you leave Android running and audio stream while switching to Windows to do some video and audio editing?

Dual-OS is a huge topic. it’s a bridge to Android-only laptop and gaming solutions. It’s a potential win for i86 and, in a bizarre twist, it’s a solution that Microsoft now has in its pocket. It’s not without issues though and if early solutions are messy it will die just as the smartbook did. Given the potentially huge gaming laptop/console feature though, the better platforms, a move to 2-in-1 hardware and the marketing budget that major OSVs have it could get the traction it requires. Are we seeing the first steps towards a shift in laptop OS for consumers and a potentially new path for the Wintel alliance? 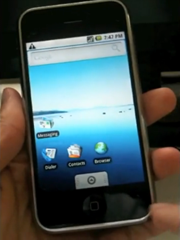 I’m pretty sure the internet can read my mind. I swear just the other day I was wondering why we haven’t really seen Android on the iPhone. It is ARM based after all. Frighteningly enough, just a day or two after that thought, this video pops upâ€¦. [Some days I think my mind might be generating reality just for me. Feel free to hit up the comments for further philosophical discussion.]

Looks like the major things are in working order for the most part. The touchscreen seems to be functional and properly mapped/calibrated. WiFi and web browsing works fine. Probably most impressive is that the phone functions (including SMS) are actually working as well. If they can ever make a release that is relatively easy to install, I might just give it a try.

More detail can be found over at the project’s blog: http://linuxoniphone.blogspot.com/