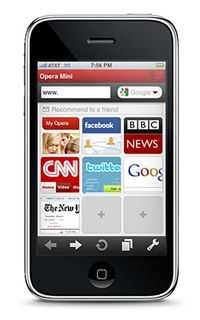 Opera Next. The next generation of mobile browsing?

Update 18.: It’s Opera Mobile 5 Beta. I’m testing on an Omnia Pro right now. Fast, good features. No complaints yet! Have you tested it?

It’s a question that Opera is going to answer very soon. The next generation in mobile browsing. There are few clues from Opera as to what it could be but Will Park of Into Mobile has had a preview and he says that the headline will soon make sense. The puzzle is gradually being completed (the image is being completed) as time goes on at the Opera teaser site. Right now you can see the right-edge of a device being held in two hands. The ‘alt’ text for the image is ‘Opera Next.’ 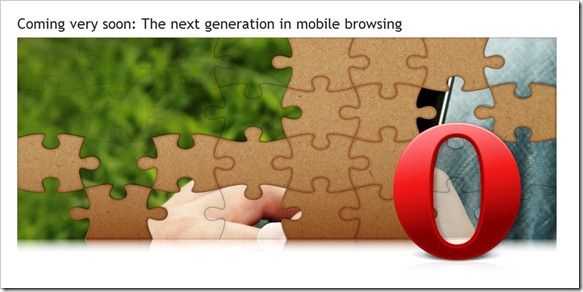 Is it going to be a new Opera Mini or Mobile product and what features would take it to the next level? Opera has already pushed the boundaries with their proxy, widget and sync features so what could be next? Touch friendly UI? Flash 9.5?

Support for more operating systems (Android has been promised) would be good but that’s hardly groundbreaking. How about location-enabled browsing? will the next Opera Mobile or Opera Mini app include the Geo API? Will Park says that there are clues in the teaser page and references ‘source code.’

Personally I think we’re looking at Opera Unite for Mobile based on what I read at GigaOM last week.

If Opera reveal one piece of the puzzle per day, we’re looking at a completed picture on Monday 28th September. 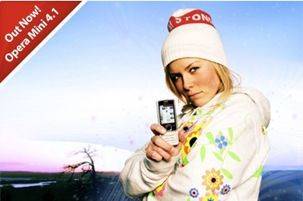 Opera Mini usage overtook use of the slow S60 browser on my N82 a long time ago due to its easy to use features and the way it renders pages but mostly, because of it’s speed. It uses a man-in-the-middle server to provide cached and optimised versions of pages that are transmitted using proprietary technology, not HTTP, to the client. Its not perfect but it works well for the average ‘browsing’ session. Version 4.1 has just been released and it brings a feature that I was missing from the S60 browser – URL history. It’s also a little faster although not that you’d really notice it in general use. I’d love to have a version of this for Windows so that I could run it on a ultra mobile PC if data usage was tight (when roaming for example) or when I’m in a fringe area and down to GPRS speeds but alas, its not available. Why don’t they build that feature into Opera desktop? It would be great to switch into proxied mode when needed.

jkOnTheRun have a list of the other new features which include web page saving (again, something I was using on the S60 browser) and more. If you want to upgrade your phone, point it to http://www.operamini.com/