This complete series is available a the original PDF. (Subsequent updates will be missing so we advise reading this updated web version.

Part One: ‘What is Ultra Mobile Computing?‘ We give you a history of Ultra Mobile computing, show you how the devices break down into segments and show you what each segment is capable of.

Part Two: ‘Details and Choices.‘  It covers the form factors, the keyboard, storage, the screen and connectivity elements of an Ultra Mobile PC. You’ll find a good overview and a lot of tips that will help you refine your choice.

Part Three ‘Details and Choices (contd.)‘ continues the details about the components and covers CPU (including a detailed overview of the currently available solutions) GPU, memory, battery, weight and cost.

Also available as a single document in PDF format.

Part 1 – What is Ultra Mobile Computing?

Mobile computing is not new. For many years there have been small and portable personal computers. Early portable computers in the late 70’s and early 80’s were big, clumsy and expensive but during the 90’s, as technology advanced, the notebook or ‘laptop’ computer became a very successful mobile form factor. During the time that notebooks were becoming successful though, there were many attempts to make computers truly portable by shrinking them to handheld and pocketable sizes. Early attempts were nothing much more than programmable calculators but by the early 90’s these had evolved into personal organisers with loadable software, touch screens and pocketable sizes. The Apple Newton and Psion Organisers were early, popular examples. During this period, Microsoft also started one of its first handheld computing projects, the ‘Winpad’ project. Various iterations of similar project during the mid 90’s resulted in what is now known as the PocketPC platform which is now the basis of most Windows-Mobile smartphones.

While these projects and products were successful handheld computing devices and platforms, the branch of computing we are concerned with here, UMPCs,  is a sub category of the PC; the x86-based platform that nearly all desk, office and notebook PCs are built on. Simply put, Ultra Mobile PC’s are notebook computers in extremely small, handheld proportions while still offering elements of productivity, connectivity and entertainment. Its all about computing on-the-move rather than between home and office desks. Toshiba were the first to make a successful product in this category in 1996 when they released the Libretto. Since then, the genre has been developing. 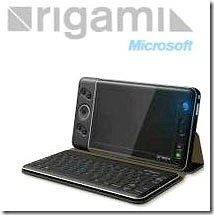 In 2006, the available technology allowed for the first time, ultra-mobile computers to be built running off-the-shelf PC components with desktop operating system and a flexible applications suite at a consumer level cost. Microsoft had been running a project called ‘Origami’ which had been looking again into alternative form factors, input methods and marketing to consumers. When the team announced the project, and the results of the project, at CeBIT in March 2006, the market received a healthy boost as OEMs started to produce devices in line with the Microsoft Origami concept. Either because of bad marketing, bad design, or bad timing, the Origami devices never reached mass market acceptance and remained, as had previous mobile PC’s, in the geek, pro-mobile and business markets. The lack of battery technology advances, poor transfer of the desktop interface to touch and keyboard-driven interfaces and the introduction of a new, much more heavyweight operating system in Windows Vista have also prevented OEMs from producing successful, low-cost alternatives

The concept, however, of a mobile computer has not gone away. During 2006 and 2007 Intel were developing high-efficiency processors capable of meeting design and user requirements head-on. At the same time VIA had been marketing their existing low-cost, low-power computing platforms that could enable OEM’s to make small computing devices and eventually, in 2007, Intel and Asustek managed to create a mini storm in the mobile computer market. First, Intel announced their dedicated silicon developments. Menlow was the platform name and it was targeted squarely at the mobile consumer and slated for launch in 2008. Later in the year (2007) Asustek took a risk and decided to launch a simple, small notebook using the same components as the Origami devices that came before it. For the first time a mobile version of a familiar mobile device came with an extremely low price. The success has surprised many and today, there are many tens of similar devices all within the 900gm to 1500gm range, all with consumer-focused pricing.

Today, in 2008, we are left with 3 main categories of ultra mobile computer.

3 – The Mobile Internet Device (MID). The device category defined by Intel as consumer focused, handheld, low cost and capable of full Internet, navigation and entertainment usage models. These devices are largely Linux-based. Other OEMs including Microsoft, ARM and Qualcomm are also starting to use this term but it appears to be converging on the consumer usage model with some targeting at the high-end smartphone market.