Archos Android Tablet is possibly the Fastest ARM-based Web Experience ever. (And as fast as an Intel-based MID)

As I lounged around yesterday #sofasurfing on the Archos 5 Android Internet Tablet (Archos 5IT) I was really enjoying the Twitter, Web and YouTube experience that makes up a large percentage of my sofasurfing time. I have no problems saying that in this scenario, it’s the best device I have and that includes the Nokia N900, Omnia Pro, Viliv S5, X70, my netbooks and a bunch of other devices that I don’t use any more. Having an HQ YouTube experience and a fast browser helps a lot.

To confirm my suspicion that the browser is faster than any I’ve experienced at this weight and size I picked up the Intel Atom-based Viliv S5, locked it into 800Mhz mode (Power-saving mode) turned Flash OFF in the Firefox 3.5 browser and spent about an hour racing the Archos 5IT against the Viliv S5. You know what, there’s just no difference at all. I doubt any consumer would see a difference with 99 out of 100 sites they browsed in a regular sofasurfing session. Some sites load faster on the Viliv. Some load faster on the Android device. In fact on the Archos 5IT, most sites seems to be ready-to-read (but not necessarily fully-loaded) before Firefox on the Viliv.

We could argue about Flash (which actually slows the Viliv S5 down quite a lot) and we could argue about some errors I see on Web applications with the Archos 5IT but at home, on the sofa, bed, toilet, kitchen there’s nothing to argue about. ARM have reached the consumer-important sub-10-second average web-page loading time. This isn’t the reliable FIE that ultra mobile PC and Netbook users are used to but in my opinion, it’s now good enough for even pro-sumers.

I know that many of you use the iPhone and iPod touch in these scenarios and yes, that experience is fast and totally enjoyable too but the difference between the 3.5 inch screen and the 4.8 inch screen (about double the space and pixels) makes it far more enjoyable. If an iPod Plus was released with a 4.8 inch screen tomorrow, that would be the only reason needed to go out and buy it. 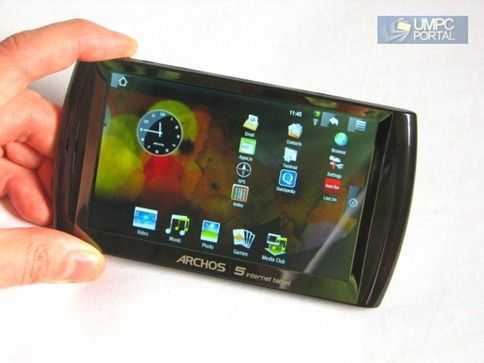 I’ve got another reference point for you. Pocketables have just tested four devices that run on the ARM Cortex core, the latest and greatest ARM offering. It turns out the the Archos Android Tablet is as fast as the current ARM-based benchmark, the iPhone 3GS. Compared to tests we did last year, the current generation of ARM-based devices are cutting page load times by at least half.

I’m sure Intel will agree that 2009 is not their year for MIDs. It was never really planned to be. With Moorestown, the platform that introduces the all-important ‘power-gating’ feature, coming in the first half of 2010, it won’t be until 2011 that we see ARM and Intel competing with the same power characteristics. At that point, Intel will have lost their Flash and run-time compatibility advantage and they will have to fight just as everyone else will; with marketing, design and developers. For me, that means getting an Apple design win because without that, the momentum in the ARM ecosystem will take them into 2011, 2012 and beyond. The Archos Android Tablet is proving that the momentum is strong and fast, at least in the dedicated Internet/Media device segment.