My test today involves using a USB 3.0 DisplayLink docking station and the Lenovo USB 3.0 Y-cable. The latter is extremely important because a lot of the 3rd-party USB 3.0 OTG cables and power injector solutions don’t work at USB 3.0 speeds. This Y-cable was ordered direct from Lenovo took 2 weeks to arrive and cost about 24 Euros including shipping from China. Unfortunately, it’s getting more and more difficult to find. Lenovo aren’t even showing ‘SKU X90G54343 ThinkPad USB 3.0 Y-Kabel’ on their German site anymore.

You might wonder what the point of testing an outgoing Thinkpad 8 is but with 4GB RAM and the Z3795 CPU the performance levels are right up with the new Intel Atom X7 CPU and should outperform the Intel Atom X5 making it a valid test for 2015 and 2016. I won’t go into too much performance detail but if you can find this model at a good offer price (details here) then buy it. [Note: Pure graphics performance on the X5 and X7 is better if you’re concerned with gaming.] 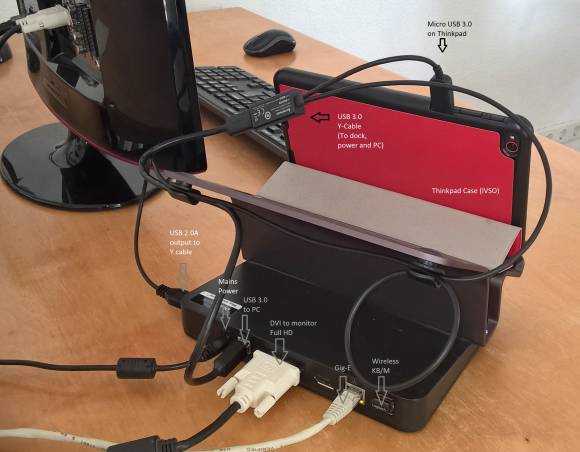 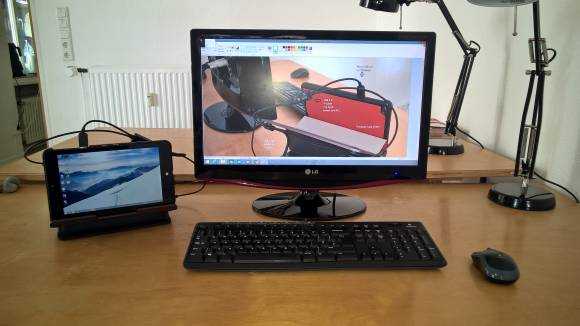 The docking station I’m using is the Belkin dual-video docking station for Ultrabooks. You can get it for under $200 which is a lot of money but it’s a tidy, solid and attractive solution. I was given it to test for free but I have used it every single day in my co-working office for a range of Windows laptops and tablets and I’ve been very impressed. It works over USB 2.0 too but the screen/mouse performance is a little jittery for my liking.

Naturally you could connect a Micro HDMI cable to the monitor for the smoothest and most responsive experience but there’s little difference when using the system in ‘office’ scenarios and there’s something very satisfying about using a single cable for power and data. I guess we’ll get more used to that with USB-C solutions.

General web performance is absolutely fine for most operations. Writing this post, editing the images and doing research (7-tabs open as I write) was problem and lag-free but opening and scrolling a large Google Docs file wasn’t nearly as smooth or quick as on a Surface Pro 3. The Google Doc load process is a really heavy load for a low-end PC. My ultimate test – one that proves I can cover every PC scenario that I use in my day-to-day work – is to edit and render a full HD video in Power Director 12. How did it perform? Watch the video…

I knew it would work but I wasn’t expecting it to work so well. With shadow files turned off it’s quick to import and quick to prepare previews on the edit timeline. It’s not as smooth to use as the Surface Pro 3, of course, but it’s productive. Rendering speeds largely depend on how cool you can keep the Thinkpad 8 because my first attempt, with the cover on, saw CPU speeds drop down to 700 Mhz, below the 1.33 Ghz base clockrate. After taking the cover off I saw 25% faster rendering. [Tip: Keep the Thinkpad 8 as cool as possible to get the best CPU performance.] I measured a 1.2 X rendering rate (1.2 X slower than real-time) when rendering out a 17 Mbps 1920 x 1080 30 FPS H.264 segments with fades and titles to a 6 Mbps H.264 file at the same resolution and frame rate. Working with 1280×720 files can increase the redering rate by 2-4 X which is pretty fast if you want to get something of reasonable quality up to YouTube quickly while on the go.

This model of the Thinkpad 8 works surprisingly well as a desktop and while it’s not as smooth to use as an Ultrabook-class device it’s to be expected given the size of the Thinkpad 8. At under 1 pound in weight this Thinkpad 8 has an incredible power-to-weight ratio.  It’s the best UMPC to date but it also proves that Atom X7-based solutions can be desktop capable. The Surface 3 is the only choice on the market right now but that could change quickly as the IFA trade show gets nearer. Atom X5 products remain a bit of a mystery for the time being but again, IFA should give us a chance to find out more.

Update: Windows 10 on the Thinkpad 8

During the preparation of this article the Thinkpad 8 has updated, without issue, to Windows 10 and I am now starting to look closely at the free Office apps, new EMail and Calendar apps and to think about how Windows 10 can help in multi-scenario computing. The new notifications center is immediately welcome and floating Store apps is going to reduce the need for dedicated desktop apps. The DisplayLink dock works under Windows 10 and does all the hardware I’ve tested so far, with the exception of Bluetooth which refused to send a file to a paired Surface Pro3, also running Windows 10. The GPS module works with the new Maps application and can provide offline turn-by-turn navigation, the Edge browser seems to be stable and fast, Connected Standby / Instant On is working with more features and Cortana, well, I don’t like Cortana because I have privacy issues with it so you’ll have to test that yourself. Windows 10 testing continues on the Thinkpad 8 along with the Acer E11 ES1, Surface Pro 3, Intel Compute Stick, Ainol Mini PC and a few other devices I’ve got set up to receive it. Stay tuned for more on Windows 10, especially reports on battery life.