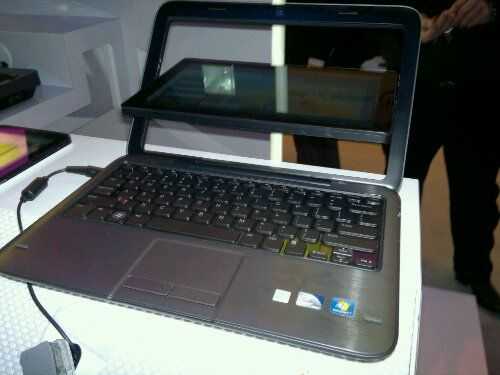 My first hands on with the Dell Duo deserves a little post. Yes it’s a little heavy as a tablet and has battery life that doesnt compete with netbooks but its a slick device. With the Samsung Gloria/PC7 on Oaktrail already,  it could have some tough competition. 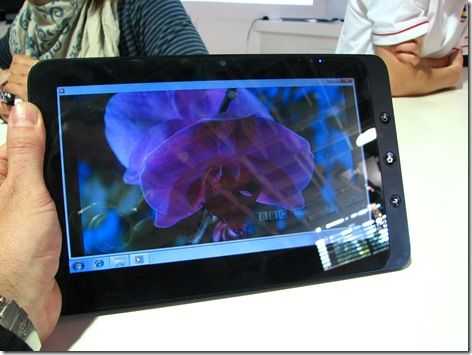 One does wonder why you’d run Android on an X86 platform that can’t even get near an ‘always-on’ capability that, if missing from Android, turns it into a very strange experience, especially if you don’t have any Google apps available. Viewsonic have chosen to include the Android build on the Viewpad 100 to give users a simple user interface option and in that respect it works but if you want to get back to the serious side of the device, it’s a 2 minute process that you won’t want to do very often.

Fortunately the Windows 7 side of the Viewsonic tablet appears to be very well built and makes much more sense. We’ve got an N455 (Pinetrail platform) CPU driving Windows 7 Home Premium and the capacitive touchscreen allows for 2-point multitouch. All Windows 7 tablet features are working. Win 7 on Pinetrail with 1GB of RAM is certainly a low-end setup but it works to provide a nice fast Web experience. As Windows tablets go, the Viewpad 100 looks good, feels good (if a little heavy in one hand) and performs acceptably. 4-4.5hrs battery life (we checked power drain) isn’t fantastic but at that weight and screen size, it’s not bad. Oh, and by the way, the 16GB SSD might not offer too much in terms of storage after the OS’ are loaded on but it seems to be fast. You’ll have to use the microSD slot for storage.

The price of 549 euros is competitive in the 10 inch Windows TabletPC space and we should see this at the end of October in the UK with Germany and other EU countries feeding in after that.

We’ve got a video coming up later and we’ll get the device into the database soon but for the time being, here are some photo’s to take a look at. 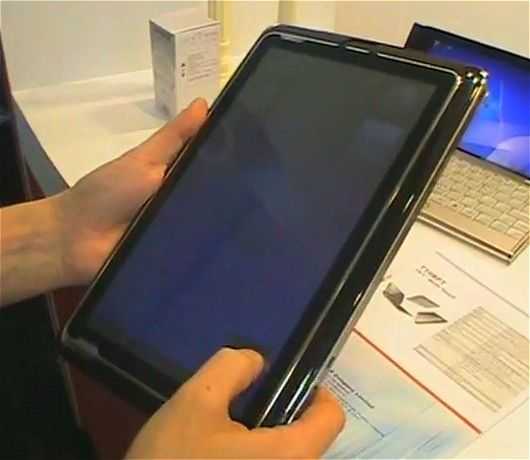 A lot of the 10 inch PC-based tablets we’ve seen recently have been built around the ‘old’ Diamondville CPU and 2-piece chipset which, although good, it’s as good as the Pinetrail platform that is now rolled out for new netbooks. Smaller mainboards, lower power and a light boost in performance is exactly what’s needed to improve the Windows 7 experience in a tablet form factor and that’s exactly what BYD have in their T10BPT. The tablet is a an OED device looking for someone to pick it up and run with it but based on the specs and JKK’s video here I wouldn’t be surprised if someone does just that. 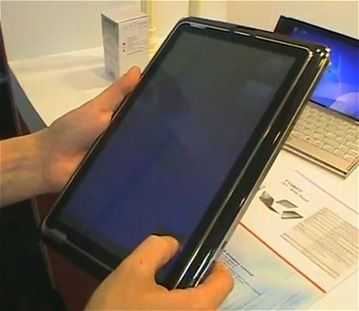 The N450 is the new Intel Atom-based chip that will be used for ‘Pineview’ netbooks in 2010. Many of you have heard about the new ‘leaked’ netbooks over the last few weeks and although it’s focused at netbooks, we think there is some scope for some relatively powerful ultra mobile PC designs using the N400-series silicon. To that end, we’ve been following the news closely.

The N450 integrates the GPU and CPU on the same die and there have been some questions over the capabilities, especially in the area of video decoding. The technical documents that are now available make it clear. There is no H.264 or WMV decoding on board and no support for digital monitor outputs. MPEG2 decoding is supported (useful for DVB and DVD standards) but that’s about it for video. So its certainly not a GMA500 core. It’s Intel technology through and through. 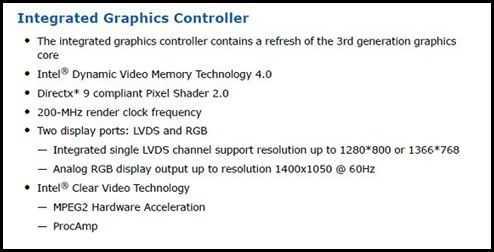 One thing we can clearly state now is that you won’t be watching HD-quality Flash videos on a standard netbook. Even when Flash 10.1 is released, there’s simply no decoding hardware for it to use. This leaves a big gap for Nvidia and Broadcom although if Intel get their act together with Moblin, the higher-clockrate Z200 Z500 series CPUs might be an option for video-focused netbooks.

For all the technical details, check out the N400-series PDF here. 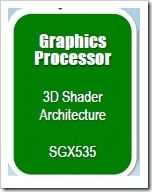 One of the things I expected to find out at the Intel Developer Forum this year were details about Pinetrail and Moorestown graphics. GMA950 on the current netbook platform clearly needs a boost in the video codec department and if Moblin 2 is only going to support Moorestown and Pinetrail along with the current generation of netbooks, it makes sense that they have the same graphics core right? It fits perfectly with Intel’s ‘continuum’ of devices on the Atom platform. Unfortunately the information on the graphics was limited to notes about OpenGL 2.0 ES and a mention of a PowerVR core in a ‘Sodaville’ Atom-based media processor presentation (image right.)

During a session at IDF this week though, I had fairly concrete confirmation from people in-the-know that the graphics on the Moorestown platform would be a GMA500 (PowerVR SGX core) as you’ll find in the Menlow (Poulsbo chipset as seen on the Asus T91, Viliv X70 and other mobile and long battery-life-focused solutions.) I was a little surprised that it’s the GMA500 but have no reason to disbelieve the info I was given.

Dovetailing nicely with that information though is continuing speculation that Pineview, the CPU+GPU on the Pinetrail netbook platform is also going to use the GMA500. The original info comes from a June article by HKEPC but LinuxDevices seem fairly confident that it is in fact a GMA500 core in Pinetrail.

Its looking like we’re going to have a very closely-matched range of platforms come mid-2010 then.

Note: In each case the graphics may be clocked at different speeds ranging from 133 â€“ 400Mhz. On current devices we see a 133Mhz graphics clock.

The exciting thing about this is that everything is aligned well to keep it simple for developers and there’s just one operating system that will sit on top of all these to provide optimised kernel, drivers, SDK and app-store. Moblin. From smartphones to netbooks through set-top boxes, PNDs, PMPs, Web tablets and more. One platform for developers that covers, in the 2010-2012 timeframe, an addressable market of over 400 million units, in just the mobile internet device and smartphone segment. Add a few hundred million on top of that for netbooks! 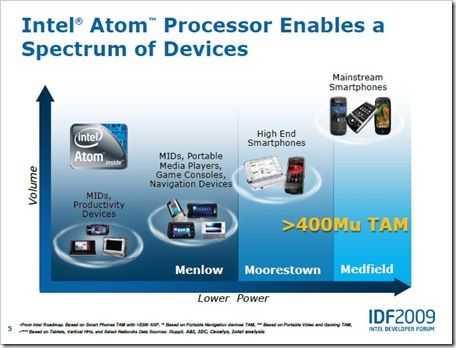 Intel’s ‘Continuum’ is starting to come together.

Be careful how you read this story. Some people are taking it as meaning there will be no more Z-Series; possibly forgeting that there is a Z-series market outside the netbook market.

Only last month, Intel told me that Menlow (the platform that uses the Z-Series CPUs) will continue alongside Moorestown. I understand that this is because Moorestown won’t initially support Windows products and Intel need an offering for the Windows-based ultra mobile market. A small market, yes, but a growing one.

There’s one aspect that we need to consider though. PineTrail could be so close in architecture, size and power requirements to Menlow that PineTrail becomes the platform used for Windows-based ultra mobile devices until Windows-capable Moorestown variants come along in 2010. It seems unlikely though based on what we’ve heard.

All will be answered when I go to  IDF is September though so you don’ t need to worry for too long.

Flash Video is still a major issue for millions of netbooks.

Nearly two years ago, Adobe announced that the Flash 9 player would support H.264. There was talk of ‘hardware acceleration’ too but event though we’re up to version 10 of the player, its still one of the most CPU-heavy video playback methods there is. Not only does it appear (in testing with many UMPCs over the last 2 years) to be CPU intensive but it still can’t hook into any H.264 hardware decoding that is available on many pc’s out there now. What are Adobe doing?

Is there a problem with hooking into the hardware layer? XP was always difficult in that respect but Windows Vista introduced  DXVA 2.0 which was supposed to make hardware acceleration easier. Not easy enough for Adobe it seems.

They must know about the problem because you don’t have to search too far in the netbook computing space to find a ton of questions about the topic. The flash video experience on a netbook, umpc and MID simply sucks! It looks like it will take a big GPU manufacturer to convince (read: pay) Adobe to fix this and that’s why Nvidia and Broadcom have said that things will change in 2010. Unfortunately, that doesn’t help the majority of the small , cheap PCs based on the GMA950 and GMA500 chipset. It looks like nothing will change for devices based on these platforms.

One hope for the big low-cost, low-end (largely Intel-based) notebook and mobile computing market is that Intel get together with Adobe to make sure that the next generation of the netbook platform and mobile computing platform  is supported. No-one knows what GPU core is in those platforms yet (Pinetrail and Moorestown) so maybe Intel will surprise us with a Broadcom core and a hardware accelerated Adobe Flash player in Moblin at IDF in Sept. As for the high-end devices, maybe Adobe is just happy to let everything run in big fat, power-hungry CPUs.