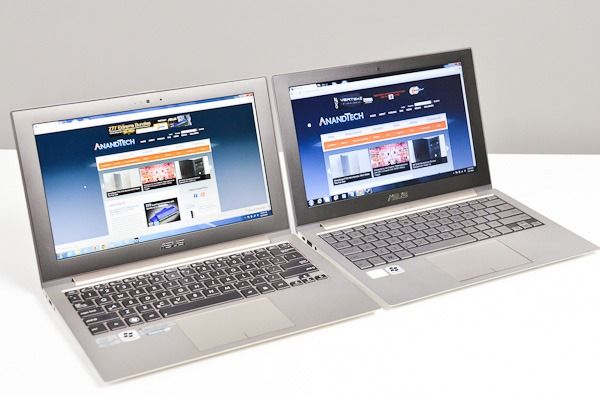 The offerings in the Ultrabook category have been growing steadily since second-gen Ivy Bridge devices started hitting the market. With this growth comes new screen sizes that deviate from the typical 13.3-inch ‘baseline’ Ultrabook. To my surprise, I’ve watched many manufacturers increasingly launch larger, not smaller, Ultrabooks. We ran a poll back in May of 2012 asking what your ideal screen size was. I was surprised to find that more of you were interested in a 14-inch Ultrabook than a more portable 11.6-inch unit. Now that the market has seeded 14-inch and even 15-inch Ultrabooks, do you still want larger Ultrabooks?

END_OF_DOCUMENT_TOKEN_TO_BE_REPLACED

Poll: What are you Waiting For in Ultrabooks?

Readers of this post will have at least given some thought to the word in the last minute but many of you are probably considering whether it fits into your buying plans. Let’s assume you’re looking to buy but haven’t pulled the plug yet. Why are you waiting?

END_OF_DOCUMENT_TOKEN_TO_BE_REPLACED

Poll: Would You Use Smart Connect on an Ultrabook?

Intel’s ‘Smart Connect‘ function is an optional Ultrabook feature that allows a computer to wake from sleep to connect to a WiFi network and update application data. Intel has been pushing this as a great ability which will help you to “stay current with automatic, no-wait updates to your e-mail, social networks, news, and more”. While that all sounds great, I can’t think of any scenario where it would actually be useful, especially given today’s landscape of applications that run from the cloud anyway. So we’re putting it to the readers, step inside and give us your thoughts on Smart Connect.

END_OF_DOCUMENT_TOKEN_TO_BE_REPLACED 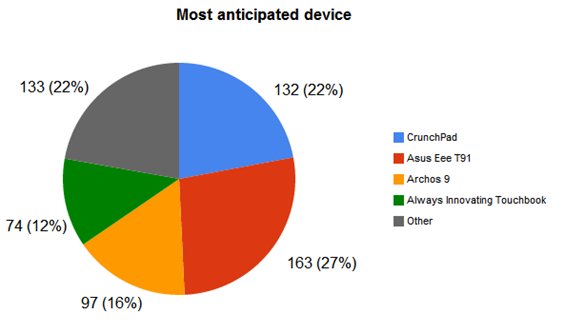 The most anticipated device, as chosen by the readers [poll results]

Several days ago I put up a post asking which device was most anticipated by readers of our site. 648 of your responded and I’m here to share the results. Take a look at the graph below:

For readers who didn’t have a chance to participate in the poll from the previous post, here is the list of devices which readers could have chosen from (click the link to be taken to the product’s Portal page).

As I watched the results roll in, the Eee T91 stayed the leader for nearly the entire duration of polling. The CrunchPad came in second, followed by the Archos 9 and then the Always Innovating Touchbook. There was a good amount of ‘other’ responses. in fact enough to tie the CrunchPad for second place (I’ll add more devices to the poll next time!). What I found interesting was that some people filled in the ‘other’ dialogue with existing devices, and some filled it in with devices that they would like to have, but might not be products at this point. Here is a short list of ‘other’ entries for existing products:

And a short list of ‘other’ entries featuring devices that don’t yet exist:

Interesting suggestions everyone. Thanks for participating in this poll. Its good to know people are looking forward to these devices. We have quite a few nice products lined up that we’ll be reviewing for our readers. Chippy has the Viliv S7 coming eventually, and we’ll also hopefully have our hands on the Asus Eee T91, and the Always Innovating Touchbook in the near future. 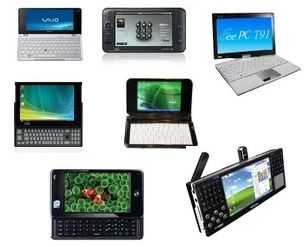 Here’s a question for you. Are you in the market for a ultra mobile PC or MID? If so, based on offerings and info available today and if you had to make a choice today, which one would you order?

I’ve listed the most popular UMPC/MID choices based on your viewing stats in the product portal.

I want to hear why you chose what you did too and if you can’t choose, why? Maybe I can use this info when I talk to OEMs and resellers. Join in with commenting below.