I messed up! Many Tab owners will end up doing the same too because of the position of the built-in mic. When taking videos in a classic ‘mirrored looser’ hand shape you need to be careful. Here’s the effect in my first video uploaded direct from the Galaxy Tab.

Note the muffled video then watch this one. Much better! The quality is actually quite good. It’s H.264 at 720×480 with a 64kbps AAC soundtrack for a total 4.2mbps bitrate. That’s why you don’t see any ripping or wobbly effects. The original file is even better. Bear in mind this one was taken in difficult conditions. I could make a much better video in sunlight! The LED lamp helps though. File analysis from KMPlayer included below.

The question remains though – why not 720p? Continuous auto-focus would have been nice too. 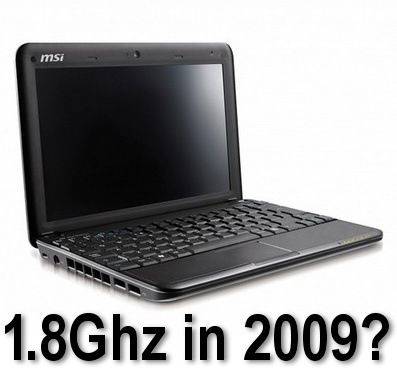 1.8Ghz Netbooks could tip the sales. 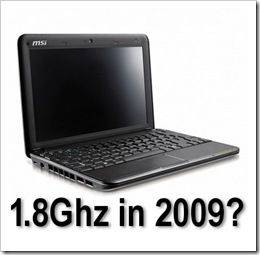 Ben reported on the new MSI netbooks recently [Not your standard cookie-cutter specs] and highlighted that MSI will use the Z530 and Poulsbo chipset, the Menlow platform, originally designed for MIDs, and not the existing netbook platform. They aren’t the first netbook devices we’ve heard about that will use this platform as the Dell Mini 12 is already out there using it but it could be that we see a lot more of these as it offers an interesting marketing possibility at a time when netbook manufacturers are trying to make their products stand out from the crowd.

LaptopMag recently interviewed MSI and asked about their decision to use the Menlow platform. The answer gives us some clues.

Why would MSI use Menlow? Part of the answer comes from MSI in the LaptopMag interview:

“Now we are going to come out with the U110 and the U115. These are similar to the past systems in size and will look like the original Wind but they utilize the Intel Atom â€œMenlow inch processor â€“ the Atom Z530.

The U110 and the U115 will be out in late January.  The biggest difference between these two models is their battery life. With the U110, we will deliver 8 hours of computing time; and 10 hours with the U115. Both will use a 6-cell battery.”

So it looks like the 1.6Ghz Menlow platform is attractive because of battery life. Not surprising as it offers a lower idle power and lower in-use power. Battery life is a very important differentiator. Menlow’s hardware video decoding (1080p using H.264) can be used to differentiate too but here’s something that is more interesting and you probably won’t hear any product manager talk about it in these terms. The Menlow platform goes up to 1.8Ghz and CPU speed is about the best differentiator a marketing group could hope for. In netbook quantities, I wouldn’t expect any noticeable difference in the price either. $20 at the till maybe. When your average netbook customer is standing with a Saturday sales rep. in the local electronics store and has a choice between a a Samsung NC10 at 1.6Ghz and an MSI Wind at 1.8ghz, for the same price, which one is the customer more likely to go for?

If this process works, if sales figures indicate a preference for 1.8Ghz, expect either a clock boost on the N270 CPU (which is likely of course) or, for the higher-end of the netbook market and the ultra portable notebook market, a lot more action with Menlow in 2009. From where we are sitting, it looks like Menlow could eat into even more of the traditional laptop market but if it’s a net gain for Intel, they won’t complain!

Check out the interesting interview and watch out for comments about Linux, touchscreens and a temporary HDD set-up. 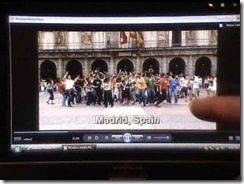 An article on Wired yesterday alerted me to something I’ve been waiting for for a long time. High Quality H.264 videos on YouTube. [Update: YouTube have now announced a widescreen player.] Medium quality stereo H.264 vidoes have been available for some time using the fmt=18 trick [example] and you can even download them with an easy-to-use Firefox toolbar add-on but the availability of the 1280×720, possibly original-format versions, is a great step forward and with a tweak of that download toolbar, you can download them too which allows netbooks and other ultra mobile PC’s to play the files that would otherwise struggle trying to play  through the built-in H.264-enabled flash player. (Video below)