Probably thanks to it’s lite customizations of the interface, the LG Revolution is actually one of the more responsive Android phones I’ve used. It’s silky smooth next to the HTC Thunderbolt, which isn’t sluggish by any means, but the level of interface customization has certainly affected the fluidity of it all.

The LG Revolution scrolls through lists very smoothly and the home screen flicks around smoothly as well. The included Let’s Golf 2 demo, a 3D golfing game, played well for the most part but I did have to restart the phone at one point because it was being very sluggish (likely due to something running in the background). After the restart it played fine. Be sure to catch the benchmarks below.

Battery life is one of the weakest points of the LG Revolution. I was struggling to be able to use the phone from day to day without running out of juice. This is likely a combination of the large 4.3 inch screen and the 4G LTE radio that’s packed inside (though I’m using the phone in a 3G area).

I ran a battery test which continuously browses the web over WiFi until the phone dies. GPS and location services are disabled and brightness is set to 100%. This test is designed to show relative values between devices and not real world day-to-day duration. The LG Revolution lasted for 3.12 hours before dying (1500mAh battery). Compare that to the HTC Thunderbolt (also a 4.3 inch screen with 4G LTE) which lasted for 3.5 hours (1400mAh battery) [11% longer even with a smaller battery] before dying.

Charging was also particularly slow through a USB port. If you forgot to plug your phone in overnight, you’ll be paying for it in the morning. I did a charging test with the LG Revolution hooked up to the USB port of my computer and it took the phone more than 6 hours to charge to 100%! Compare that to 2 and a half hours for the iPhone 4 to charge from zero to full from a USB port.

Standby was also really pathetic. I left the phone on over night from 100% charge and 11 hours and 26 minutes later, the phone was down to 75%. That means around 2 days of standby max if you don’t use the phone at all (this test was conducted with GPS and other location services turned off and one Gmail account and one Twitter account set to 15 minute sync.

I’ve run the LG Revolution through the usual benchmarks and it performed pretty well compared to contemporary devices: 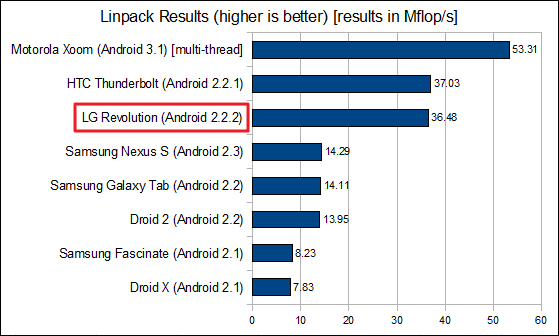 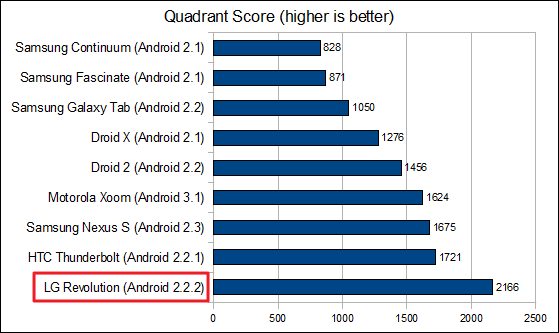 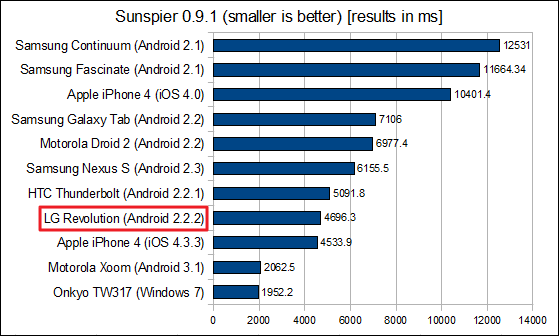 Verizon says that their 4G network will deliver between 5-12 Mbps download and 2-5 Mbps upload.

I’m unfortunately not currently in an area covered by Verizon’s 4G network, but I have had prior experience with it on the HTC Thunderbolt and LG’s VL600 4G USB modem.

Laptop Magazine has been able to specifically test the Revolution’s 4G capabilities, so I’ll direct you over there to have a look.