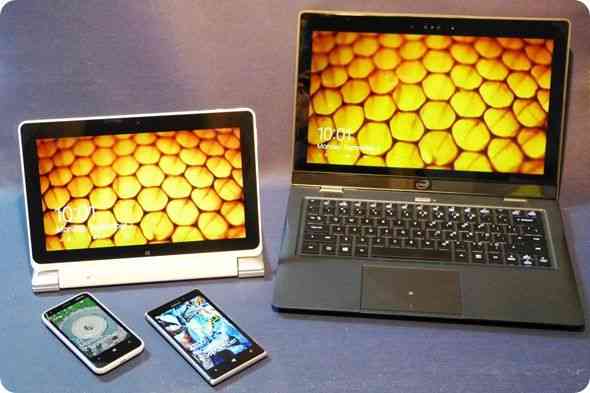 It’s been a long time since I wrote about an Ultra Mobile Reporting Kit. V11 was back at CES 2012 and since then I’ve attended a number of important trade shows where the kit hasn’t changed much at all. Bridge Camera, Nokia Cameraphone, Tablet, Ultrabook. For IFA and IDF, two back-to-back events that start on Wednesday this week I’ve put together something new. It’s Windows-only and the plan is that there won’t be any cables involved outside of overnight accommodation. That means no chargers for laptops and no USB cables for charging phones. It’s a bold move.

Reporting kit V12 has been made possible by some major battery-saving changes in Intel  architecture. Introduced in the Atom world a few years ago the system-on-chip design with extremely tight power ‘island’ control is now available in Haswell Ultrabooks and brings the same level of battery life advantage. We’re reaching up into 10hrs of on-time per charge which means that mains cables can finally be left at home.

The heaviest processing load on my kit comes from video editing and although some advances have been made in the Atom platforms, they haven’t kept up with the demands of YouTube viewers. Those demands come from the urgency and the quality requirement. Although I still limit myself to 720p, I’ve pushed the quality up a notch. Ultimately means that I need Intel Core under the keyboard. It’s a shame because that’s about the only thing I need an Intel Core-based device for; Otherwise I’m just cropping and popping photos, typing or reading – activities that can easily be achieved on the new Clovertrail-based Windows 8 devices. I use my Acer W510 a lot!

I know, it’s a lot to carry, and it doesn’t include the camera or phone but I’ll save a lot on the cables and chargers, about 400gm, and I’ll have a backup laptop should something happens to one of them. That’s important for such an important set of events.

The camera is still the Panasonic Lumix FZ150 with its long zoom and impressive optical stabilization. I won’t move to a bigger sensor camera because it’s too damn heavy and for 600px wide images there are some tricks I can use to get usable photos from a small sensor.

Since I bought the Nokia Lumia 620 recently (a quality bargain) I’ve been confident that I can drop the Nokia 808…if I can find the right camera to replace it. Windows Phone 8 is, without any question, a huge step up from Symbian Belle and I’ve found enough in the Windows Store to cover almost everything I need to do on a tablet. I’m missing some Google Plus capability but to be honest, I’m using Plus less and less these days.

The Nokia Lumia 925, kindly loaned by Nokia, is working out well. The cam on the Lumia 925 is extremely impressive in low-light scenarios and the optical stabilisation really helps to avoid times when a flash might be needed. I’ll be missing getting a few party shots but that might be a good thing for all concerned! Windows Phone 8 has a hotspot facility which is something that the Nokia 808 never had. It will also be my Amazon Kindle reader although the lack of screen rotation lock can be awkward  when lying down.

The Lumia 925 has good battery life, until you really use it hard when, like any phone, it drains quickly. I’ll take the Nokia Lumia 620 to supplement it. Total weight of the phones is 270gm. The Nokia 808, with a bumper, weighs 194gm so I’m not adding much by taking two phones. The set-up also gives me multiple SIM flexibility.

And that’s it. No battery packs, no cables, no chargers. Risky?  Perhaps. I’ll let you know how it goes.

I’ll be covering Bay Trail news at IFA and IDF so stay tuned here for that. For Haswell-based 2-in-1’s and Ultrabooks, go to Ultrabooknews. (I’m expecting some interesting mobile computing devices in the lower-TDP end of that category.)

Other kit in the bag…

Mobile reporting kit V12 isn’t the lightest but it’s got power, battery life and redundancy and won’t need cables. I’m looking forward to reaching into a tidier backpack this time round.

Extra: I’ve be taking a closer look at solar-powered mobile reporting…in extreme conditions.  The Scott Expedition is taking on an amazing set of kit. I’ll be interviewing the expedition leader this week too so watch out for updates on that here at Ultrabooknews.