Every August I get myself organized for IFA and IDF, the two most enjoyable and informative events on my circuit. CES in Las Vegas is fun but there are more relevant products and information for me at IFA and  IDF, the Intel Developer Forum. This years tour is 14 days long so once again I need reliable kit. In 2013 I took an Ultrabook, a 270-degree rotating touchscreen netbook-style laptop and two Nokia phones along with my bridge camera. This year I’ve got the same line-up but with three different computing devices. I’ve dropped my Acer W510 and replaced it with, no, not the Acer Switch 10, but a Chromebook. The two Nokia phones are also different.

The Chromebook I’ve chosen (I bought it, it’s not a loaner) is the Lenovo N20p shown above and I chose it because since I reviewed the Lenovo Flex 10 I’ve been a huge fan of 270-degree fold-back screens. It permits lay-flat mode (ever used that in bed or to raise the screen up in a seat-back scenario? If not, you should) and the really useful, casual and coffee-table friendly tablet-stand mode.

The Lenovo N20p Chromebook won’t be with me during the working day but it will be my travel companion. Films (most carried on the MyDigitalSSD PocketVault USB3.0 SSD drive) and consumption of RSS/Magazines/podcasts should be the main scenarios (the latter will be an interesting challenge for a cloud device while in the air) but I also expect to use offline Google Drive to write the occasional blog post.

I expect the N20p to be my consumption device in the evenings while the Ultrabook crunches videos and images. With 7-8 hours (measured) of video battery life and an estimated 6 hours of casual web browsing the Lenovo N20p is likely to be well-used over the next 14 days.

Moving on to the smartphones I’ve got the Nokia Lumia 1020 (bought very recently) with the Xenon flash and 42MP sensor. I expect to be able to get some good low-light photos and some quick videos. It’s got all the maps on it, my music, podcasts, RSS feeds and of course, Twitter, Skype, Facebook and Whatsapp for messaging. In the background will be a Nokia 808 running 2G with no data connection a multi-SIM card (same phone number as on the 1020) It’s simply my back-up phone (it will last over 7 days without charge in this scenario) and backup camera if everything else goes wrong. Talking of cameras I’m still using the Panasonic Lumix FZ150. I didn’t upgrade to the FZ200 but having read some reviews on the FZ1000 I’m close to buying something new in the telephoto camera/video department. Why a bridge camera? It’s light and it’s good enough for online photography and video in almost any light. I’ll stress that again – I’m creating news content for online usage, not creating 4K documentaries.

The usual paraphernalia will go with me. A USB power pack, Bluetooth headphones, cables and cards and as with last years tour (mobile reporting kit 12) it won’t be a lightweight kit. Perhaps the Lumia 1020 and the Ultrabook would be enough on their own but for a 14-day tour that would be too risky.

There’s one thing I want to highlight about my year-old Haswell-based Ultrabook. The battery isn’t as strong as it was and although I’m still getting 6+ hours out of it, it’s going to be a risk if I don’t take the power adaptor. Remember this, if you’re thinking about an all-day PC, it might not be ‘all-day’ a year later.

Stay tuned for IFA and IDF reporting across the UMPCPortal, Ultrabooknews and my new site, Chromebookworld.

The lightest off-grid reporting kit of 2014.

Here’s a kit I’ve been having fun with this summer. I’ve dropped the Nokia 808 for the Lumia 1020 (I didn’t have the 1020 until recently) but that Acer W4 (3G version) with the Microsoft Wedge keyboard and Changers solar panel and storage is about as light, as capable and as efficient as it gets right now. If you’re thinking about an ultra-mobile and ultra-light kit this weighs just 1.4KG (ignore the additional stand as it’s included in the Wedge keyboard cover. 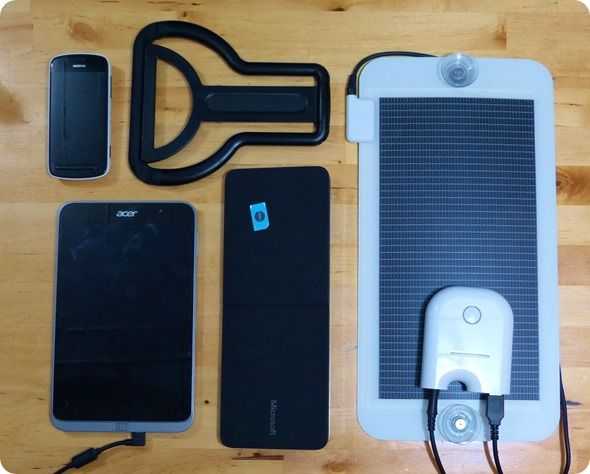